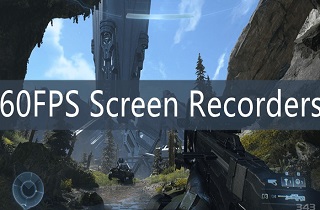 A practical screen recorder is a tool no PC should be without. It can come in handy for a teacher who wants to make engaging video tutorials or a game enthusiast who wants to share his gameplay with friends. And while there's an abundance of apps available, you shouldn't just settle for any screen recorder. Get a desktop screen grab tool capable of recording at 60fps. FPS stands for frames per second. It is the rate or frequency of images shown in a video per second. So a 60fps video means there are 60 frames of still images shown per second. Generally, you can expect smoother quality when you playback a video at a high frame rate. In this article, we'll show you the ten best 60fps screen recorder for PC for whatever content you need to capture.

Distinctive Feature: It has a task scheduler feature to automatically record the screen.
Price: $49.95/ lifetime payment
Platform: Available on Windows and Mac OS.

Atop our list is Screen Grabber Premium from Ace Thinker. This efficient screen capture app lets you record at 60fps and 1080p resolution. Screen Grabber Premium lets you record screen activity in full screen or custom window. Furthermore, you have control of the cursor, which is very useful in making instructional videos for better topic flow. You also have a choice of taking in audio from the system or the microphone, or both. This 60fps screen recorder caters to gamers with its dedicated game recorder mode. Aside from this, it also offers webcam recording for a picture-in-picture experience. A slew of other features includes setting the recording length and taking screenshots while recording. See the steps below to learn how to use Screen Grabber Premium.

Download Screen Grabber Premium from the link above and follow the installation process. Use the email you provided to register. The free version is usable, but it is better to upgrade to the professional version to avail of its powerful features. When you complete the installation, launch the app and you will see the interface as shown below. 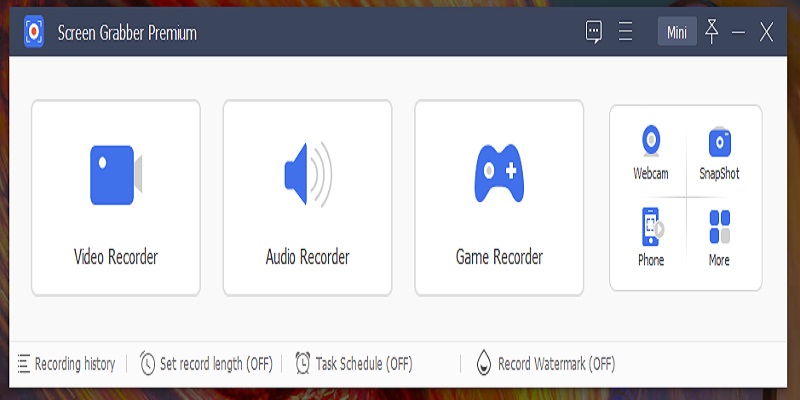 Click on Video Recorder to choose the screen size you wish to record. You can choose full screen or custom to select a part of the screen. You can also change the resolution from here. You may choose, depending on your preference, the audio you want to include in your recording. You can toggle on system sound or capture sound from the microphone. 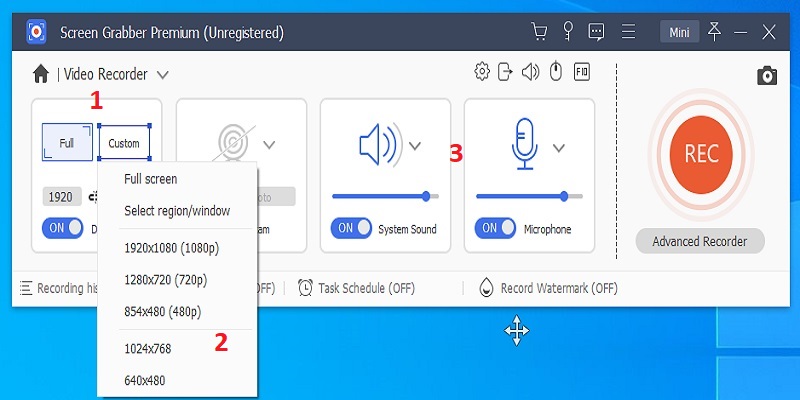 Click on the settings tab to set your preference for recording like showing a countdown or hiding the floating bar and interface. In the output tab, you can select the video and audio formats and set the frame rate to 60fps. You can also control the volume as well as the cursor from here. Additionally, the settings provide preset hotkeys that you can use for easier navigation. 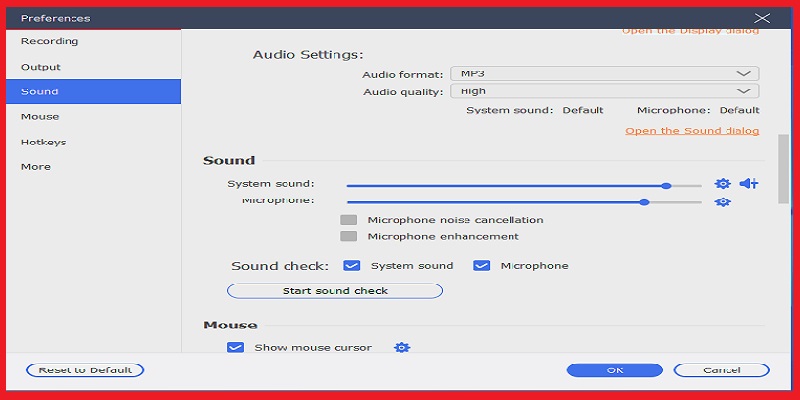 When you complete setting up your preferences, click on the red record button to start recording. A default 3-second timer will let you know when the recording starts. You may choose to set a length of recording(the free version limits you to a 3-minute length only). While recording, you can put annotations like arrows, shapes, and texts. You can also take screenshots of parts of the recording. 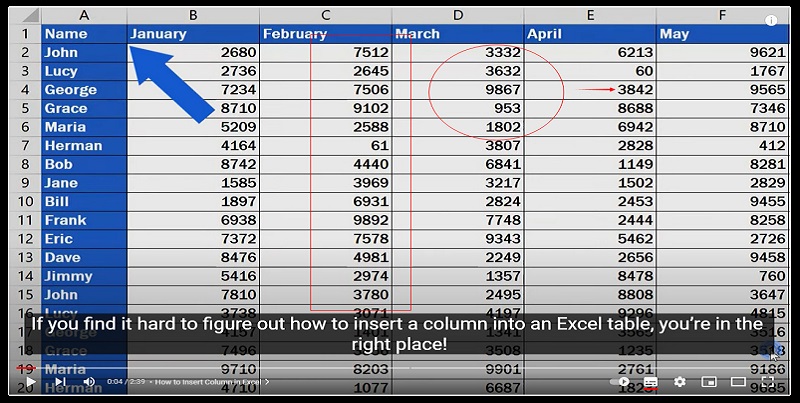 Clicking on the red stop button ends your recording. The built-in player will then let you preview the video you just recorded. Choose the save button to save your recording and select the file path you wish to save it to on your computer. Now you can watch your recording anytime you need to. 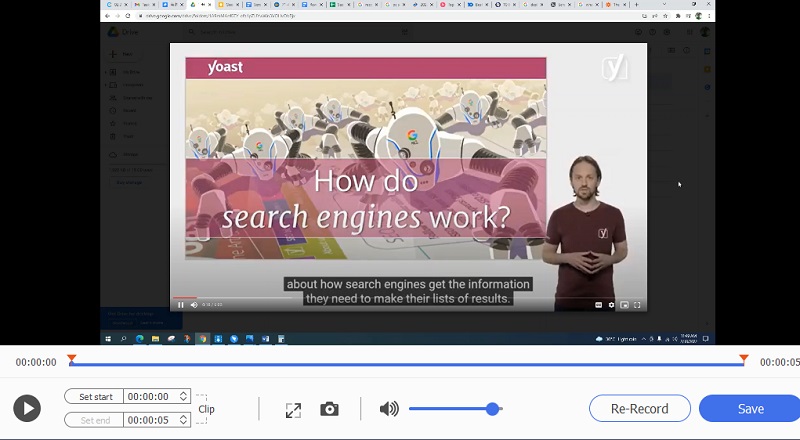 Distinctive Feature: It has a task scheduler feature to automatically record the screen.
Price: $29.95/lifetime purchase for 2 PCs
Platform: This is available on Windows and Mac OS.

Gamers will appreciate the game mode recording for all their gameplay sharing. RecMaster can record screens at 60fps for games and any desktop activity. One feature that stands out is its program window recording. It lets you use your recently opened folders as preset recording windows. Click on other modes, select the program window and choose which window you want to record. Start recording while working on that window. You can try the free version with a 2-minute recording limit. A one-time purchase lets you in on all its features, including updates and tech support. 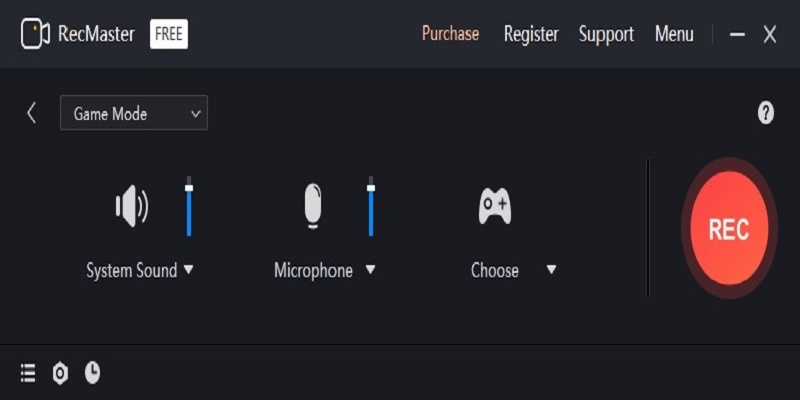 Task Scheduler: It has a task scheduler feature to automatically record the screen.
Price: $59.96/2-PC license
Platform: This is available only on Windows OS.

Another light but powerful 60fps recording software is Bandicam. It is capable of recording various 2D and 3D games such as Roblox, PUBG, LoL, World of Warcraft, Minecraft, etc. You can also use this for Windows programs like Excel, Powerpoint, and Skype Video chatting. Other features include webcam recording that allows for an overlay to add your webcam video to the recording. A scheduled recording lets you set a start and stop time for your recording. You can do other stuff while you record. 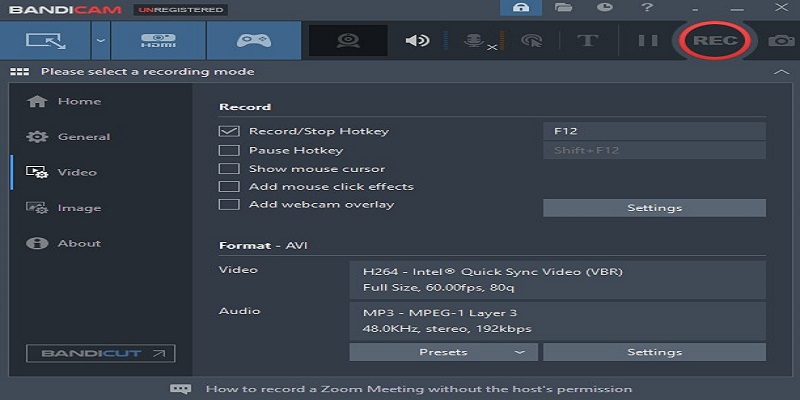 Task Scheduler: It has a task scheduler feature to automatically record the screen.
Price: $59.95/lifetime payment
Platform: This is available on Windows and Mac OS.

Like most 60fps screen recorders, Apowersoft has a free version that motivates users into getting the pro version to use all the features. Apowersoft greets you with a straightforward recording toolbar that lets you choose screen size, resolution, and audio source settings. It has a task scheduler for time-sensitive recordings. The app is able to do webcam recording as well as write annotations in the recording. What is missing, though, is a dedicated game mode. 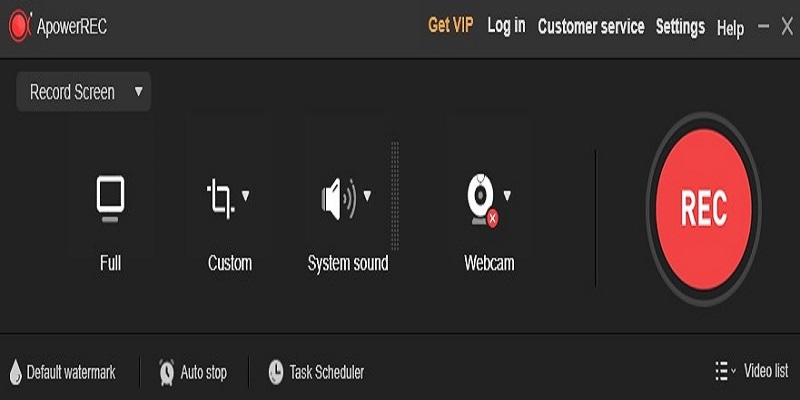 Task Scheduler: It does not have a task scheduler.
Price: $224.99
Platform: This is available on Windows and Mac OS.

Easily the most expensive among the best 60fps screen recorder for PC, Camtasia has your familiar recording interface with the screen and audio options. You can record anything on your screen, from video calls to Powerpoint presentations to YouTube videos and websites. Camtasia goes big on its editing features. Add annotations and transition effects to your video. The built-in editor lets you add enhancements like media or even your voice. 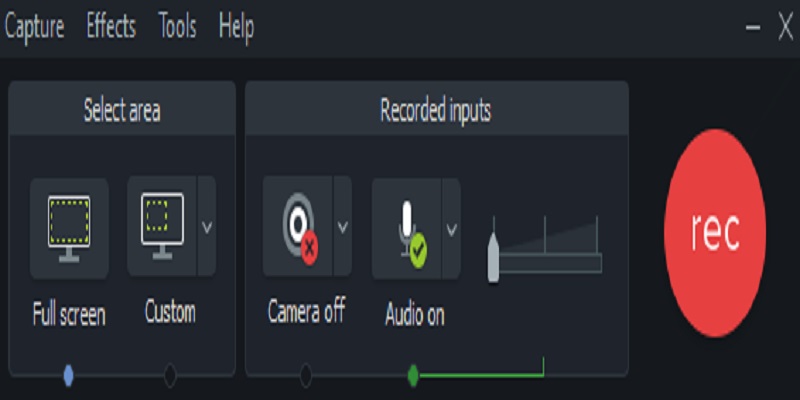 Task Scheduler: It does not have a task scheduler feature.
Price: Free
Platform: This is available on Windows, Mac and Linux.

An open-source screen recorder, OBS Studio is very much capable of recording your screen in 1080p resolution at 60fps. OBS is ideal for those creating videos then adding some refinement to the audio. Video and audio editing tools include audio mixing and noise cancellation. As soon as it launches, the app will ask you your purpose for using the program. That way, you are sure the settings match your purpose. In addition, the video setting is set to 60fps whenever possible. Unfortunately, OBS Studio's interface is not that easy to follow. The start button is at the bottom end corner, and you still have to choose the source from the other side of the screen. 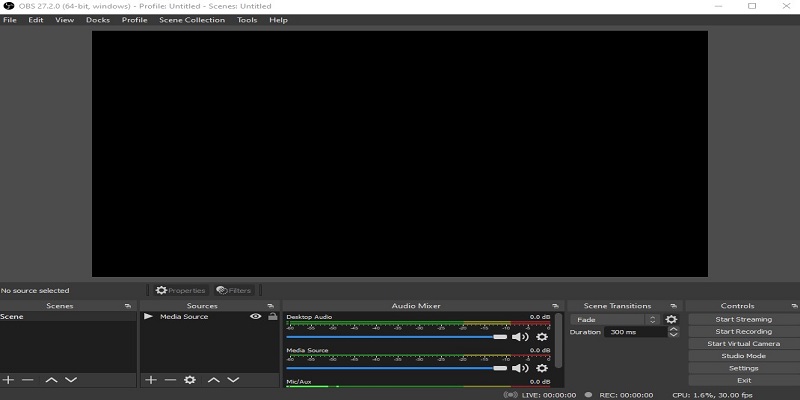 Task Scheduler: It has a task scheduler feature to automatically record the screen.
Price: $39.95
Platform: This is available on Windows and Mac OS.

Debut Video Capture Pro is available in free and paid versions that records screen at 60fps. This software lets you record whatever is on your screen, be it a Powerpoint presentation or streaming content. Audio settings let you set the sound from the system or the microphone. The drawback to this application is that it lacks a video editing tool that may prevent you from adding improvements to your recording. 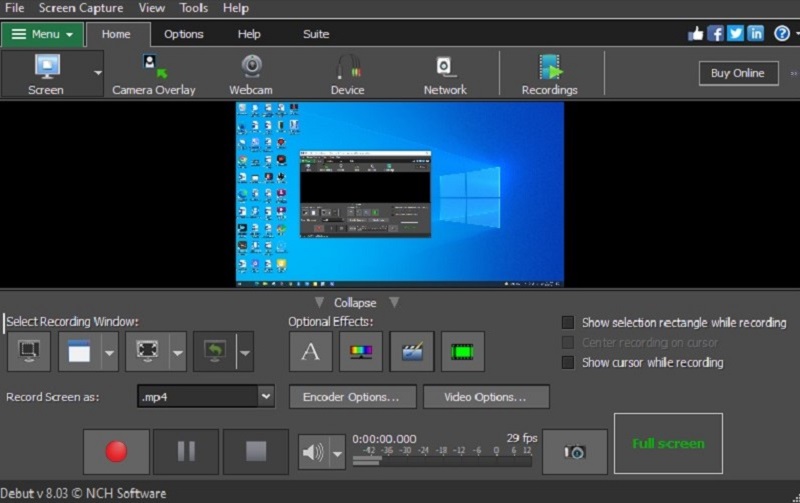 Task Scheduler: It has a task scheduler feature to automatically record the screen.
Price: $74.00/One-time purchase for 2 PCs
Platform: This is available only on Windows.

Download the free version to try this software. It's a fast download that takes you to Flashback Express simple interface. Choose your screen preference as well as what sound you want to use. But after you examine the interface more carefully, you will discover a lot more well-thought settings that will help improve your recordings. You can change the desktop background or even hide icons. Also, a dedicated gaming mode is available. This 60fps recording software is only available on the Windows platform. 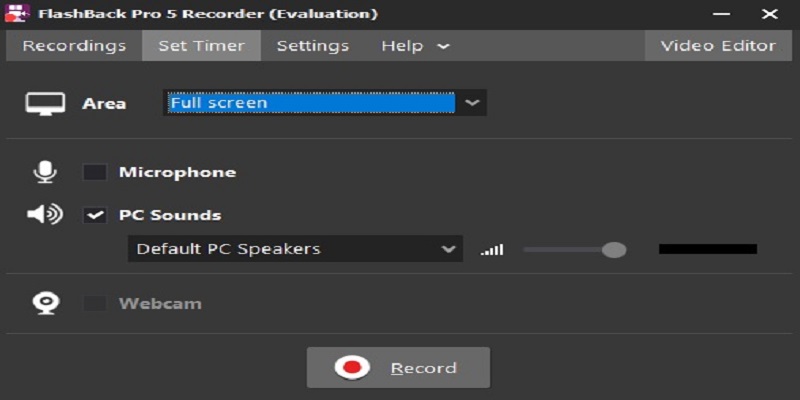 Task Scheduler: It does not have a dedicated task scheduler for recording.
Price: Free
Platform: This is available only on Windows.

Sharex is another open-source app able to record screens at 60fps. The interface may be a thing to worry especially for beginners, because of not being too straightforward. Needing some getting used to aside, this software has its advantages. It's free, plus it does not carry any watermarks. Also, a great feature of ShareX is it can do a scroll screen capture, which is excellent if you need to get all information on a web page. 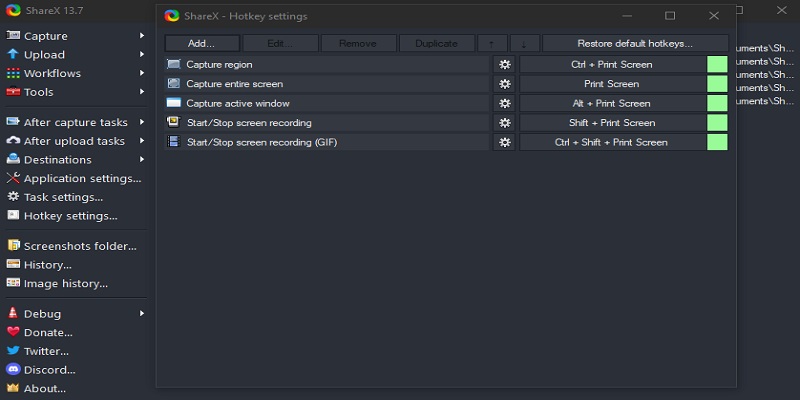 Task Scheduler: It does not have a task scheduler
Price: $5.00/month paid annually.
Platform: This is available on Windows, Mac, iOS, Android and Chromebook.

Screencast-O-Matic lets you start recording for free so you can try its features. And it offers a lot. As with the other 60fps screen recorder in this list, Screencast-O-Matic gives you the chance to record your screen and everything happening on it. While there is a 15-minute limit to a recording, this app makes up for it by letting you record as many times as you want. You can do other stuff, too, while recording. You can also choose to get audio from the system, the microphone, or both. After recording, the editor lets you trim your footage or add captions before saving in your computer or directly sharing to YouTube. 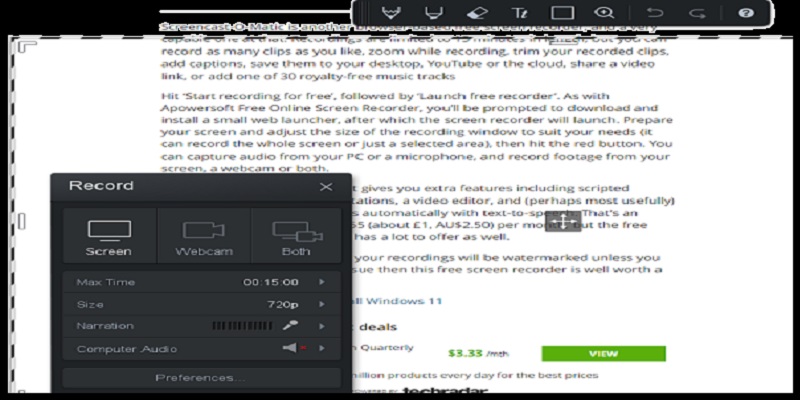 Having at least a 60fps screen recorder on your PC gives you the ability to playback video recordings that may have plenty of movement like gameplay. Before hitting the record button, set the video frame rate to 60fps. You can refer to the list above of the best 60fps screen recorder for PC.

2. What is the best 60fps screen recorder for PC?

After testing numerous HD screen recorder, Screen Grabber Premium comes out as the best of the bunch. The app gives you full control in making screen grab from online class tutorials in 60fps to gameplays easy and without losing recording quality. The paid version is truly of high value.

3. How to take a screenshot of your entire screen on Windows and Mac?

For Windows, the fastest way to capture a full screen screenshot is to simultaneously press the Windows Key+PrintScreen Key. This saves your screenshot automatically. For Mac, press Ctrl-Shift-C then click the Full Screen option. 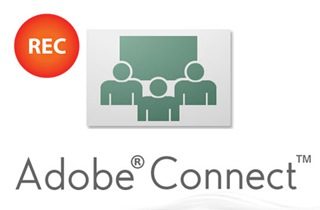 How to Record Adobe Connect Session with Ease 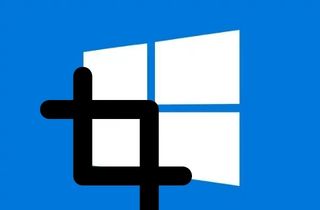 How to Screenshot and Crop on Windows 10 | Tutorial