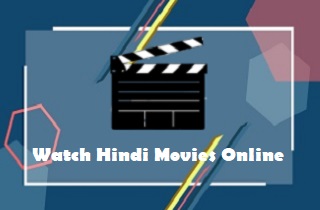 Hindi movies is an Indian Hindi film based in Mumbai and it has became the largest filmmaker in India in the year 2017. Also, it is a compound extract from Bombay and Hollywood - the American film industry center. Some critics and film journalists criticize it because they believe that the industry is a poor Hollywood cousin. Likewise, most Hindi movies talk about life and are among the oldest industries that stimulate a sense of humor, splendor, color, and lightheartedness in the viewers. If you want to watch Hindi movies online and don't know what sites to visit, read this article and get the best Hindi sites to watch Hindi films.

The first site that we will introduce is Hotstar; it is an Indian site wherein you can watch Bollywood movies and it is one of the best sites to watch Tamil movies online anytime you want. It is an Indian subscription video streaming site that is operated and owned by Star India. Besides, this Hindi site consists of several libraries of content from all the Star TV channels that you are usually watching on Cable TV. Aside from that, it has a straightforward user-interface wherein you can easily search your desired Hindi movies anytime you want. Also, most of their movies are on HD quality. 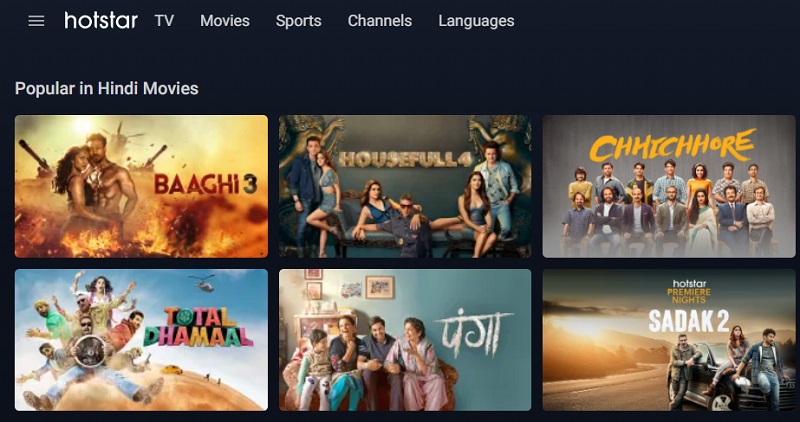 You can search your desired Hindi movie from its search bar depending on the category.

Prmovies is another Hindi site to watch Hindi movies online; it has an intuitive user interface wherein you can effortlessly search your preferred Hindi movies on its search bar. Since this is a Bollywood site, you can watch more than 100 Hindi movies on HD quality. You can also watch different movies aside from Hindi, such as Telugu, Punjabi, Irani, Pakistani, and Bengali movies. In addition to this, there are multiple sections available on its main interface that lets you search Hindi movies, Bollywood movies, Kannada movies, etc. 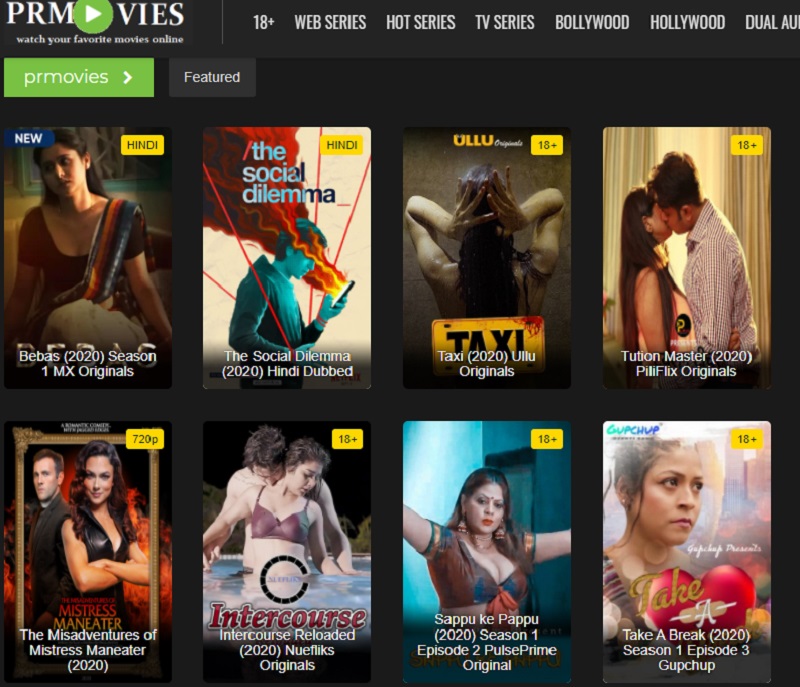 This site can be streamed to different countries aside from India for free.

Zee5 is a Hindi movie site that consists of an extensive collection of famous Hindi movies depending on genre. It is one of the best Hindi sites to watch online Hindi dubbed movies because there are no ads appearing on the site. Likewise, the collection comprises old and new films such as regional languages, news, and TV shows with better streaming speed and video quality. Aside from that, it has a bundled content from over 90+ live TV channels, and it consists of many languages to choose from like Hindi, Bengali, English, Malayalam, Tamil, Telugu, Marathi, and a lot more. 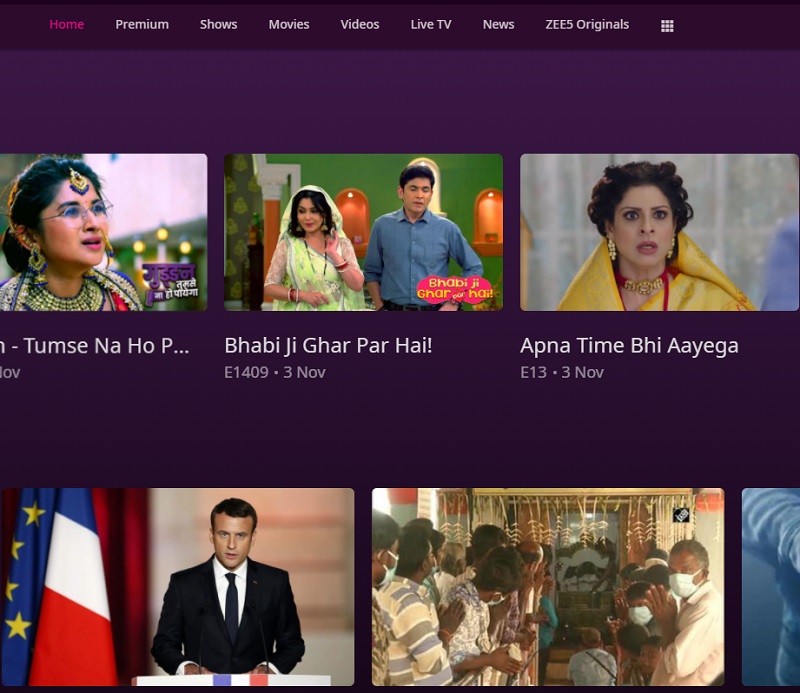 This site is one of the most straightforward OTT service providers compatible with different platforms like Windows, and you can continually watch movies without appearing in ads.

Voot is another free Hindi sites to watch Hindi movies online HD quality free. It is known as one of India's most prominent video streaming sites, and it offers thousands of hours of data for all types of consumers. Also, it consists of favorite TV channels colors, Nickelodeon, Blockbuster movies, and more. Besides, it lets you stream Comedy Central, Colors TV, MTV, and many more channels LIVE with Voot Select – so you watch fresh episodes of shows such as MTV Splitsvilla, and Brooklyn Nine-Nine with the rest of the world for free. 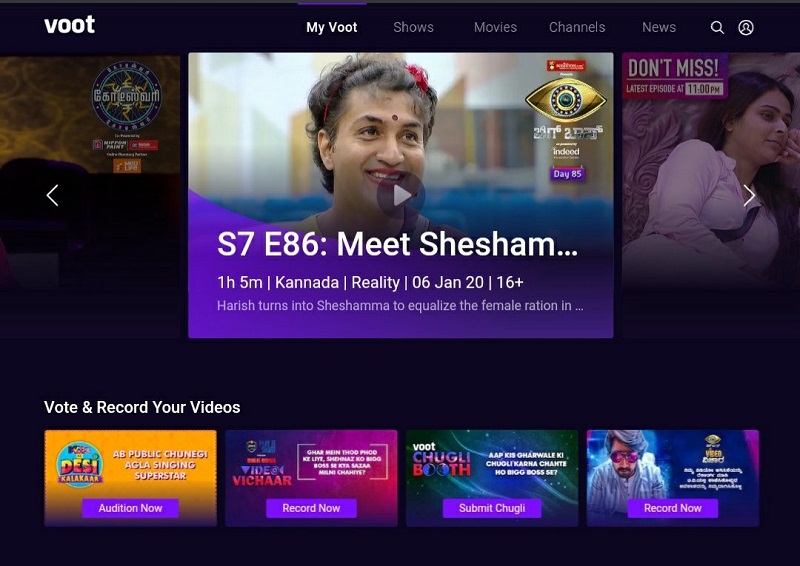 Voot is an ad-free site wherein you can watch Hindi movies without interruption.

One of the most visited streaming services in India is SonyLiv. It consists of tons of entertainment movies, Live sports, Hindi movies, Live TV channels, and more. Sony Pictures Networks India also owns it, and it is an Indian general entertainment streaming site in India. Besides, it has access to 18 years of data from several channels of the Sony entertainment network. Apart from that, you can watch your favorite Hindi movies in HD quality. 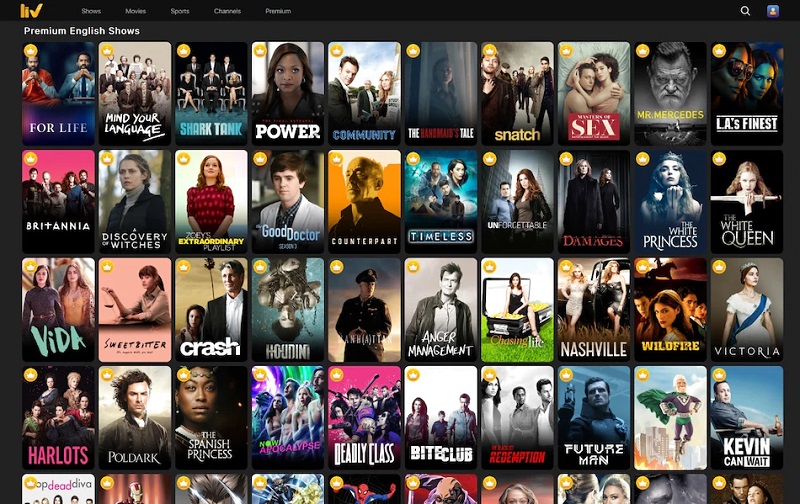 This site is one of the best Indian premium videos on demand that provides a multi-screen engagement compatible with different devices such as mobile phones like Android.

Hungama is an Indian movie site owned by Hungama Digital Media Entertainment that acquired the website in 2000 that allows users to download TV series. It provides numerous movies and news related to the Indian industry, mostly Bollywood film reviews and box office reports. It became the most authentic read Bollywood daily that presents the tinsel town's most happening news, videos, glamorous events, and more. Furthermore, it includes more than 5000 films in English, Hindi, and regional languages like Telugu, Tamil, Punjabi, and more. 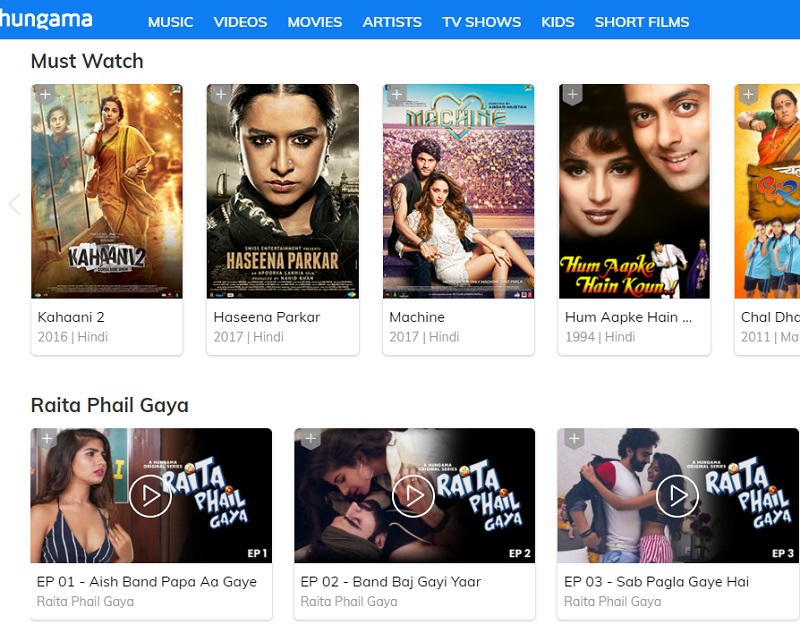 Hungama is a well-known popular streaming site in India that is available on mobile devices and online.

YuppTV is an over-the-top content provider in India that allows you to watch Hindi movies online free without downloading high quality. It consists of numerous famous Hindi films and other films like Hollywood. It also became one of the largest online TV platforms covering 200+ Indian TV channels, Latest Regional, and Bollywood movies. With YuppTV, you can stream your favorite Hindi movies and TV channels across different genres like Sports, News, Comedy, Romance, and more. 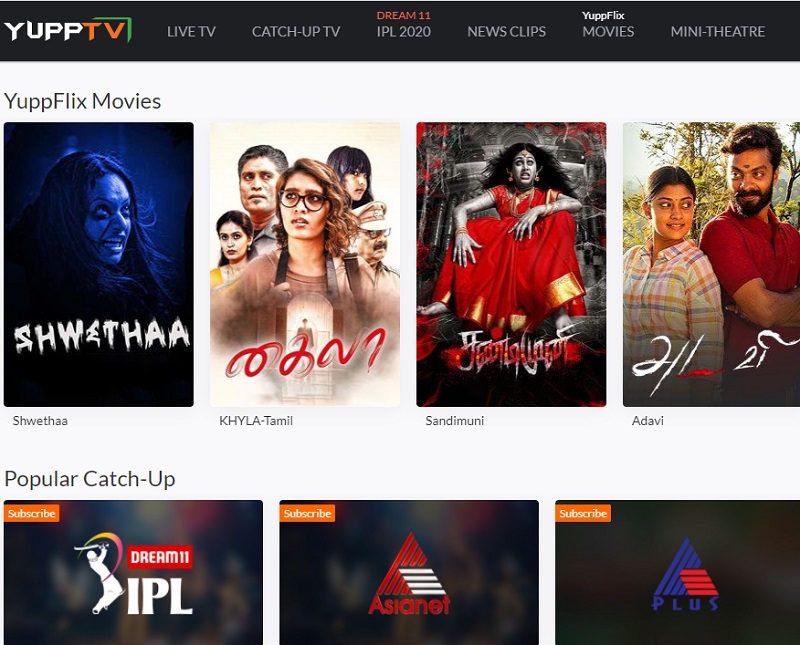 YuppTV has its organized user interface wherein you can effortlessly search for your desired movies, and it can access 25 devices such as mobile phones and computers.

Another best site to watch Bollywood movies online free that you can visit is Bigflix. India's leading streaming sites include more than 2000 latest Bollywood movies, top classic movies, and regional blockbuster movies to watch. You can instantly watch movies by streaming them on your favorite devices like mobile phones, computers, or laptops. Moreover, it lets you watch movies on your mobile devices such as Android and resume from where you left off on another device without experiencing any problem. 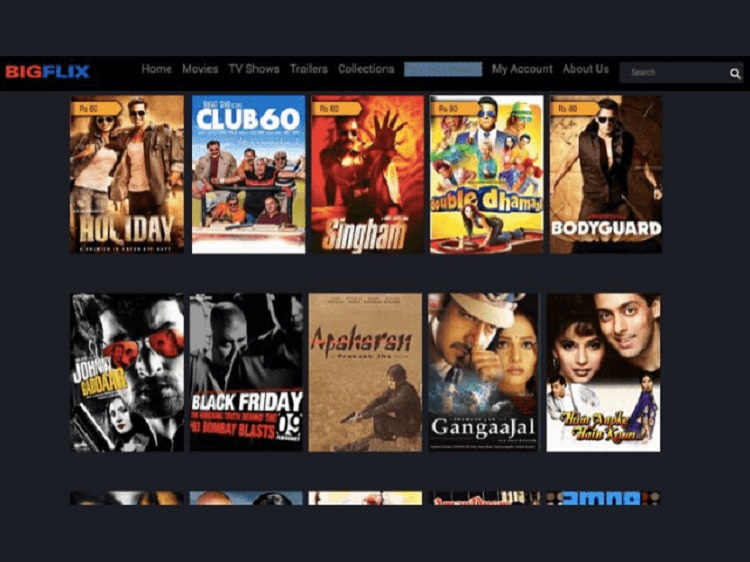 Aside from watching Hindi films on this site, you also have an option to download them and watch them on your computer without an internet connection.

Zenga TV is a free Hindi movie online site that lets you watch more than 100 live TV channels, Indian and Hollywood films together with the music content. It offers various international and Indian movies in different genres, such as news, entertainment, regional, kids, food, lifestyle, and many more. It also became the number one OTT player and digital video company and Zenga Media Pte Ltd brand. In connection with this, you can download movies from here and access them on different mobile devices like Android. 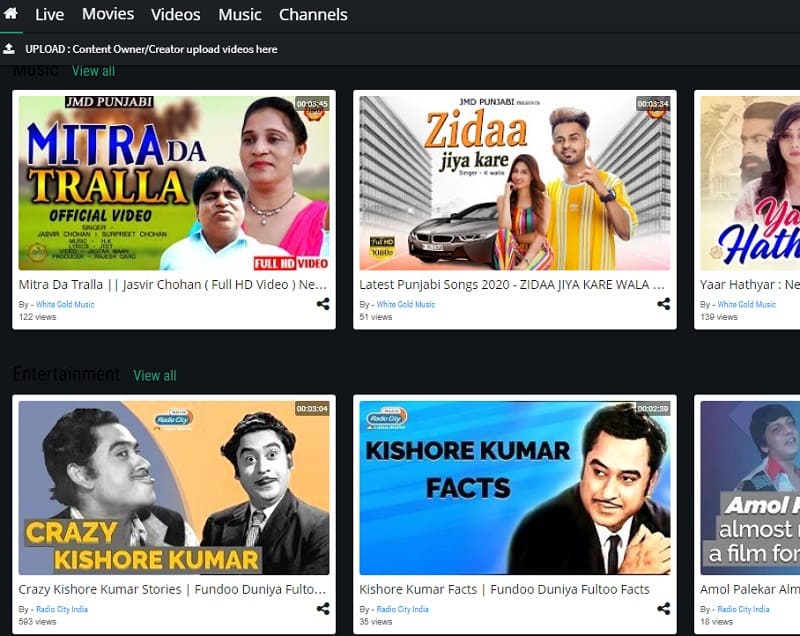 Zenga TV is a streaming platform that offers many HD quality Hindi movies to watch. Also, you can directly download them from their website to watch them in offline mode.

Our last Hindi movie site that you can visit is Eros Now. It is a subscription streaming platform, video-on-demand entertainment, and media platform that was launched previous 2012. This site is owned by Eros Digital, which is the digital media management arm of Eros International. Furthermore, you have to subscribe to this site to access Eros Now's premium bundled services such as Hollywood movies, TV content, Hindi movies, and more. Plus, it has a straightforward user interface that helps you to search for your desired movies in different categories such as comedy, drama, and more. 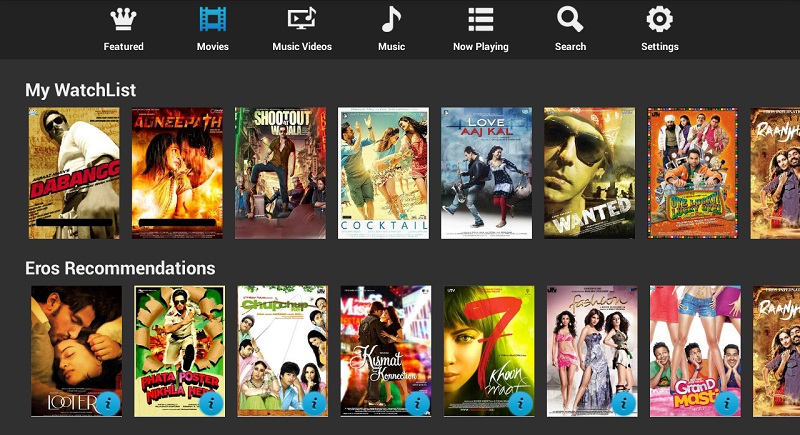 Eros Now consists of numerous languages to choose from; these include Tamil, Bengali, Punjabi, Marathi, and more. 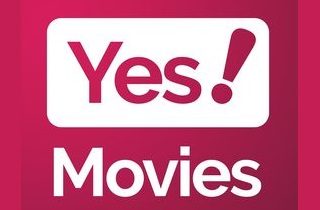 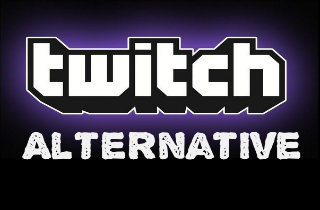