It’s common knowledge that different files come in a range of different formats. Depending on what they are, there are multiple formats available for different purposes, such as documents, audio clips, pictures, and videos. You may have heard of the widely used WMV and MP4 files, but do you know what they are? WMV (Windows Media Video) and MP4 (MPEG-4) are very popular video formats. They are both formats that are played by many video players, so why do we need to convert WMV to MP4?

Well, there could be several reasons for this: One of the major reasons is the selectivity of the video players themselves. MP4 is a much more user-friendly format for video players and is accepted on a lot more video players. Along with this, the MP4 file plays on a lot more devices, while other formats are not supported on devices like a smart TV or an iPad.

Best Desktop WMV to MP4 Converter for Mac and Windows

The first tool that is recommended for you to utilize is the Acethinker Video Master This tool can help you convert WMV files to MP4 or vice-versa. Meanwhile, you can also convert into different formats, including MPEG, FLV, MKV, and more. This tool is suitable for both Windows and Mac OS. Besides that, this tool can help you compress videos, create GIFs, enhance videos, and add or edit file info. Also, you can do some basic editing by adding watermarks, filters, subtitles, and more.

Follow the prompts for the installation as you click the “download” button above to get the Acethinker Video Master app. Launch the app once it is ready. It should be the same interface in the picture shown below. So, we can start turning those WMV files to MP4 videos. Click "Add Files" to upload the WMV video that you wish to convert to MP4. Next, hit the "Dropdown" menu beside "Convert All to." Choose MP4 from the list of available formats. Aside from the format, you can also choose the video quality as you prefer. Once you already set everything for the output, you can now click the "Convert All" button to start the conversion. Wait until the process finished. As the conversion ends, you will see an indicator icon that shows "success" on the interface's top right. Also, the output folder you set-up will open automatically wherein the converted MP4 video was stored. For people who prefer to get their work done online can use AceThinker Online Video Converter to convert their files. It's a web-based application that allows you to convert between a wide variety of video and audio formats, including MP4, WMV, AVI, MOV, FLV, MP3, WMA, etc. And it will be quite easy to get the conversion done even for newbies since the website is very intuitive. Here the detailed steps on how to convert WMV format to MP4 are listed below for your reference.

Step 1: Visit the official webpage of AceThinker Online Video Converter. Click on the option "Select Files to start" to select the WMV file that you want to convert to MP4 format. 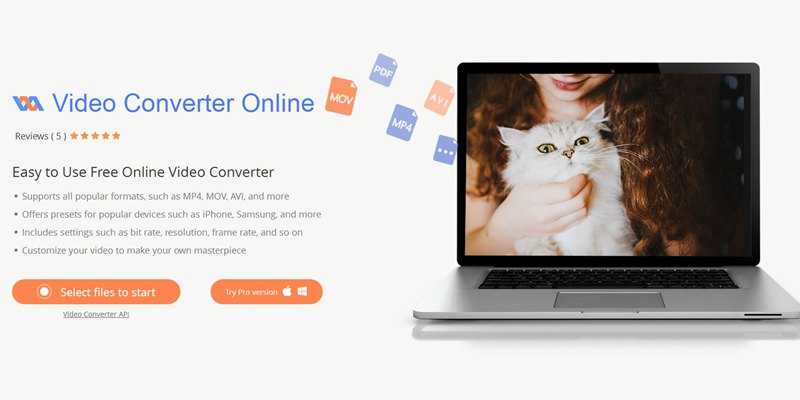 Step 2: Now, select the MP4 format which you will convert your file into. Click on 'Settings' to change the resolution, bitrate, and other options. Step 3: After you are done with your settings, hit the 'Convert' button. The conversion may take several minutes because of the online process. So you have to be patient with that. When the conversion process is finished successfully, download your converted file to your computer's hard disk. 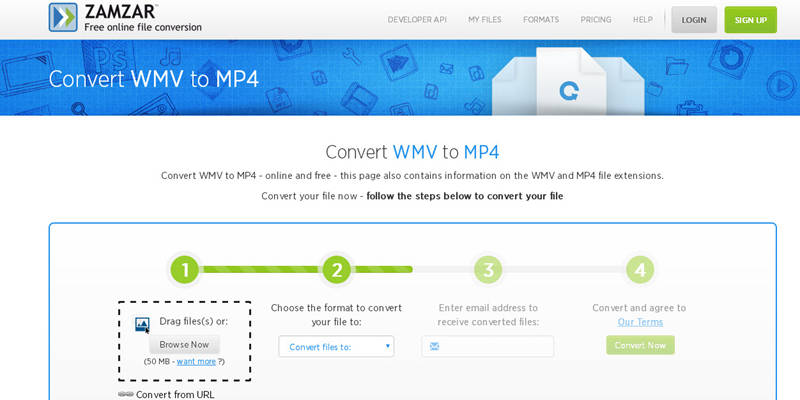 For converting WMV files to MP4, ZAMZAR WMV to MP4 Converter is another great choice. It's a free online file converter that supports a wide variety of video formats. There is no need to download any program on your computer as all you need to do dragging the target WMV videos, choosing the MP4 format as the output format, and doing. The interface is simple, and there is also an image and text guide showed on the main page, making it a breeze to get all the conversion tasks done. If the size of your WMV video is less than 50MB, you can give ZAMZAR a try. Windows, Mac, and even Linux are well supported.

More About Converting WMV to MP4

These are some of the basic reasons to convert a WMV file to MP4 format. There is plenty of software available for Microsoft Windows Operating System and Apple Mac Operating System, which helps you with file conversion. Sometimes the process may go wrong and will eventually result in certain problems. The most common type of problems faced when converting a video file from WMV to MP4 format may include:

These problems mostly occur when you use non-trusted software to convert your videos with. For your convenience, we have listed the best three ways to convert your WMV files to MP4 format.

What is WMV Format?

Windows Media Video (WMV) is a series of codecs and their corresponding codec formats for a multimedia file that is developed and maintained by the Microsoft Windows Operating System.

What is MP4 Format?

MPEG-4 (MP4) is a digital multimedia format which comes handy in the field of storing videos and audios with subtitles and as well as still images. It also allows streaming over the Internet and is mainly based on Microsoft Windows Operating System.

As you know, the difference between WMV and MP4, it will be easier to convert the files from WMV to MP4. If you want less complication while converting your videos, using the above-mentioned software is highly recommended. You can follow the simple steps listed above and get your work done easily. Top 8 MKV to MP4 Converters for Win and Mac Best 6 MP4 to MOV Converter for Windows and Mac