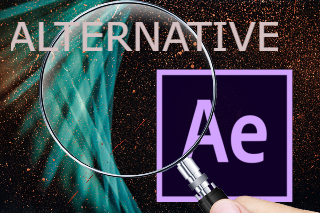 Photography and videography have been an on-demand way to document sentimental memories of our life. Whether you want to collate the moments of your wedding day, your graduation day, birthday, and even baby shower, a video will come in handy. Nowadays, capturing video is quite dull; thus, many of us utilize video editors to make our video more enhanced and professional-looking. One of these video editors is Adobe After Effects. This tool taught us editing and inputting effects on our video footage. However, the question is, is it the only tool that we can put video effects on? Well, not by a long shot. This article will provide a wide range of Adobe After Effects alternatives that you can choose from.

If we are talking about Adobe After Effects Alternative, we have to start with a reliable desktop software like AceThinker Video Editor. This software is smart and intuitive that can combine and turn videos, music, and photos into a cinematic video with a few clicks away. Whether users wanted to produce a business promotion video, a software review, an educational tutorial, a gameplay video, or others, this movie maker definitely will not let you down. With its vast number of editing features, including trim and cut, split and combine, and rotate and crop, this tool is the perfect video editor for vlogs and aspiring video enthusiasts. Furthermore, it offers various visual and sound effects that users can apply to the project video. It has 20 types of video overlays. There are more than 40 amazing filters to choose from; this is the reason why this desktop application is one of the most-used After Effects alternatives nowadays. Ultimately, this tool has a real-time preview wherein users can check and play their project video before exporting or saving it.

A step-by-step walkthrough on how to edit video with this alternative to Adobe After Effects.

To get started, install the AceThinker Video editor by clicking the "Download" provided below. The first button is for Windows computers, and the latter one is for macOS. Then, follow the guide or the installation wizard to pass through the prompts. Launch the software to access its interface. Familiarize its functionality and navigation.

Then, click the import button to add the video that you wanted to edit and enhance at the uppermost left of the tool. Once imported, utilize different tools such as insert text and title cards, transition effects, overlays, and even the 40 distinctive filters to enhance the project video. Then, to save all changes you have made, click the export button. 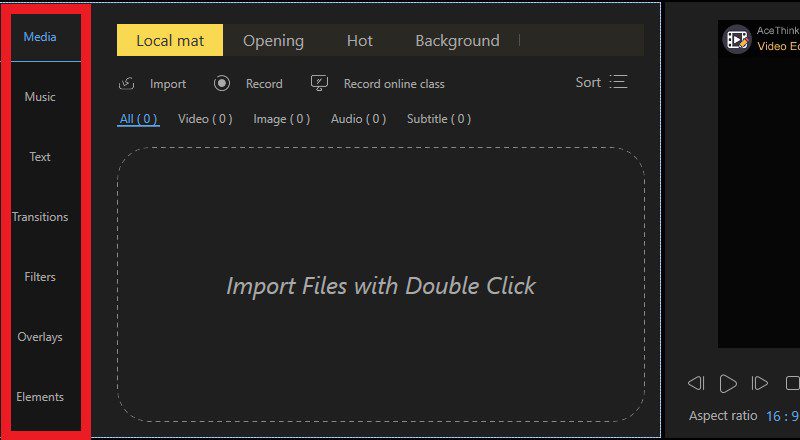 Lastly, to locate your exported video, go to the output folder on your computer. Click the video play and preview it. The output video is compatible and shareable on different social media accounts such as Instagram, Facebook, YouTube, and more. 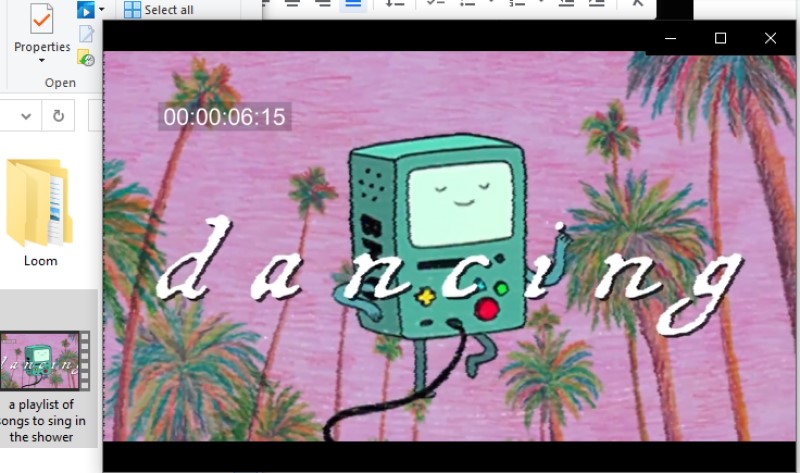 Blender is a 3D computer graphics software that enables users to utilize its toolsets for creating and editing video files. It is a perfect alternative to After Effects due to its ability to animate films with extensive sets of visual effects. It can also edit 3D printed models with its interactive 3D application features. Furthermore, it can enhance virtual reality videos and computer gameplays with its color correction features. More so, it has a Smoke and Fluid Simulation that has been widely used for video editors to generate realistic animations of fluids such as water and smoke. 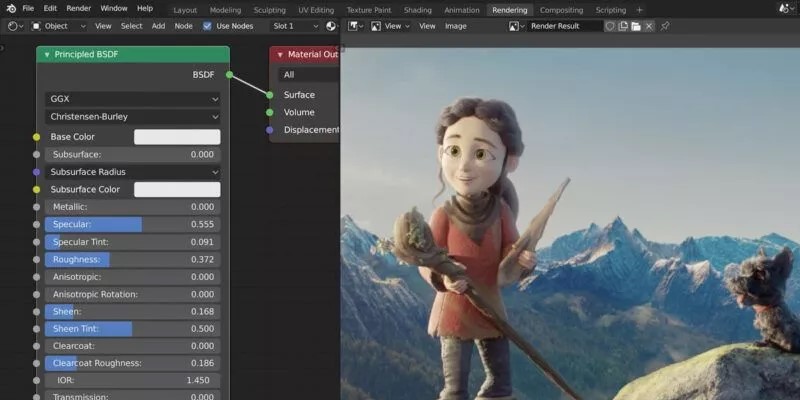 Blackmagic Fusion, formerly known as Eyeon Fusion, is a post-production alternative to After Effects that is typically used to create visual effects and digital compositing for movies, commercials, and more. It employs a node-based interface in which editing processes are built up by connecting a flowchart, this function can't be utilized in After Effects. This type of compositing interface enables users to be flexible and able to modify the parameters of the video editing process. Moreover, it has advanced editing features including, network rendering, deep-pixel processing, AE plugin support, 3D particle system, and more. 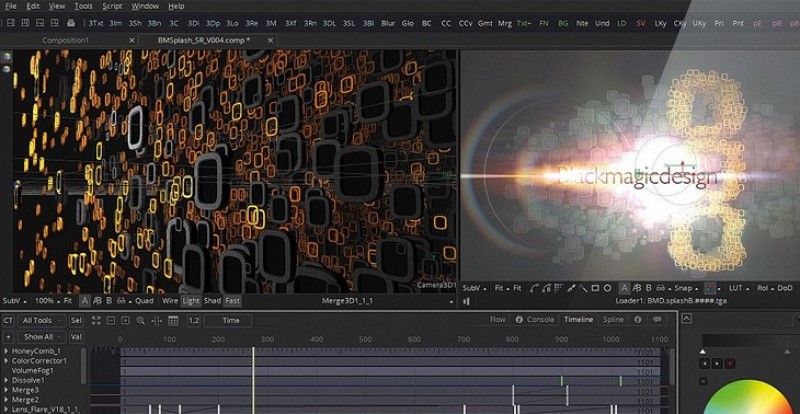 Autodesk Smoke is a video editor and video effects software that gives post-production companies a more enhanced video output appearance. This tool is one of the good Adobe After Effects alternatives due to its ability to increase the productivity of combining editing workflows with non-based compositing tools in a timeline-based interface. It also has 3D text and geometry features that enable users to create dynamic 3D titles with bevels, per-character animation controls, and textures. In addition to that, users can express their emotions and story through its dynamic trimming tools that modify and adjust timing as well as the timing navigation. 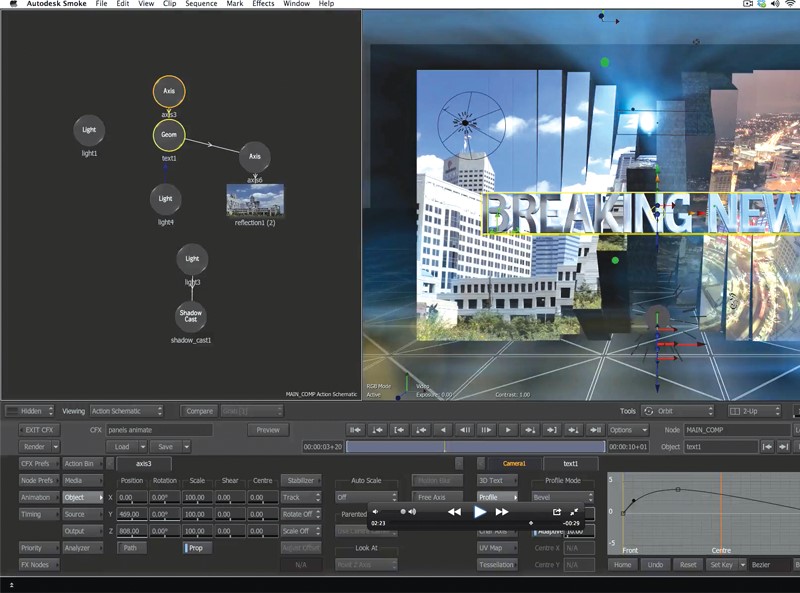 PowerDirector is a video editing software founded and developed by CyberLink. This tool is considered a great After Effects free alternative due to its ability to edit and enhance 8K videos without losing the original quality of the file. It also comes with a feature wherein users can customize shapes and objects in a project video. This tool supports motion graphics and animated titles, perfect for creating animated short stories and clips. Moreover, it provides numerous ready-made templates that users can apply to the project footage. 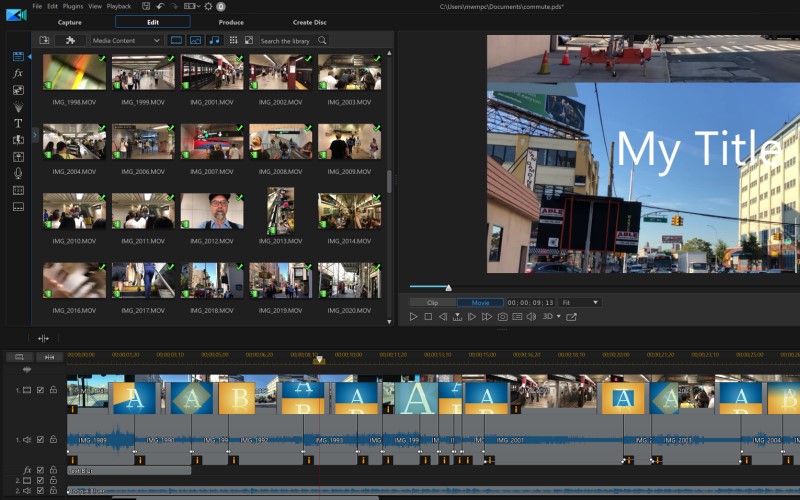 Corel VideoStudio is a video editing software that provides a professional-looking video output that is perfect for vloggers and content creators. The program lets users edit and enhance high-quality videos such as 4K without losing their original quality. This ability to modify high-quality videos is the best feature and the reason as well why it is the most common tool to serve as an After Effects alternative. Furthermore, it also enables users to customize the movement of titles, graphics, objects, or video clips. More so, its ability to track audio or voice lines in videos and convert them to subtitle segments is phenomenal 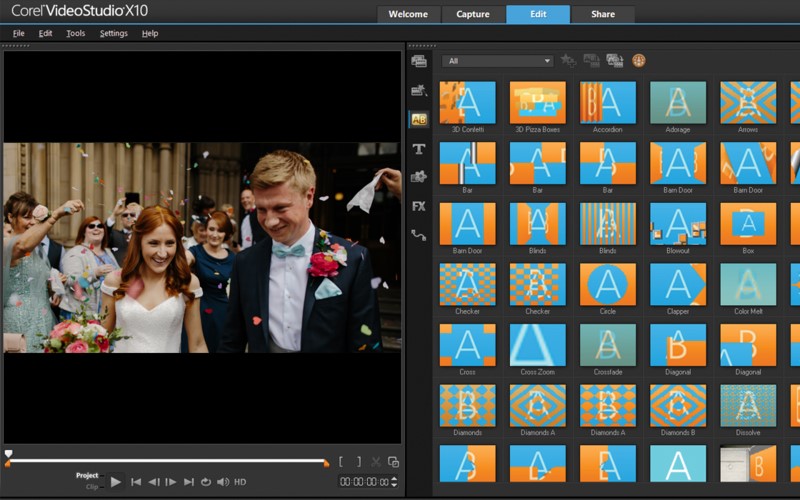 Wondering why Camtasia is on the list of Adobe After Effects alternatives? Well here’s the answer for you. This tool is a video editing software allowing users to create professional-looking videos such as how-to tutorials, video demos, video vlogs, and more. It offers eye-catching titles, callouts, and annotation that can be inserted into the projected video. Also, this tool allows you to add zoom-in, panning movement, and zoom-out animations. Not only that, but this tool has a built-in recorder allowing users to capture and cut crisp video and audio clips from your desktop screen. 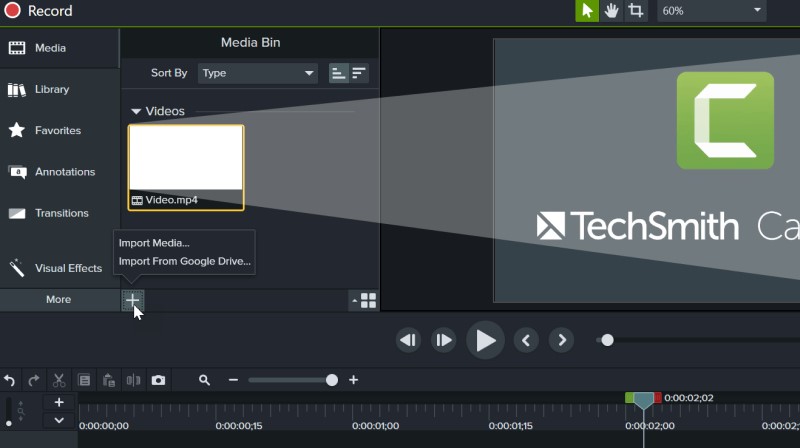 Continuum is a video editor developed by Boris FX. It enables users to edit video smoothly with its 17 creative effects. The prominent thing about this software is its ability to provide cinema 4D effects on the output video that After Effects doesn't have. Not only that, but it has tons of video presets to start a video project. This is perfect if you are trying to edit videos for Instagram stories, TikTok videos, and etc. Furthermore, it supports FX browsers applications and Title Studio that create 2D and 3D titling and motion graphic text which are customizable. Moreover, it has a 360 video editing feature that is perfect for modifying virtual reality videos and more. 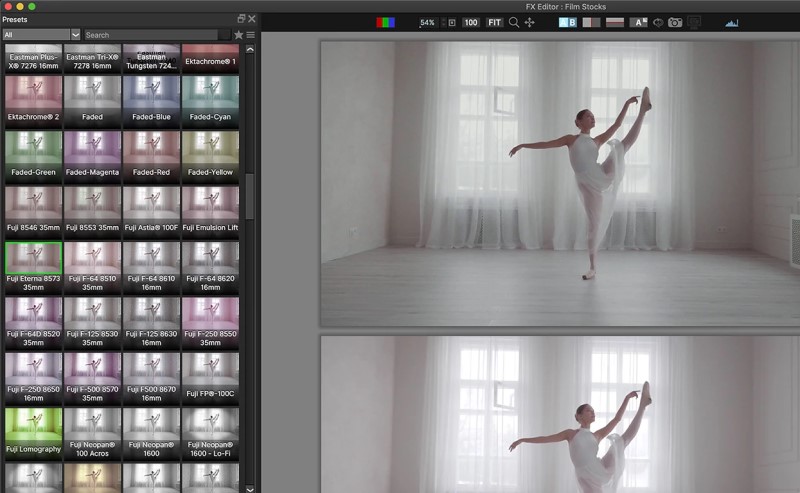 Natron is a powerful digital video editor that handles all 2D and 2.5D videos. It is an open-source and cross-platform tool that has keying, Roto, 2D tracking, and more features that are essential for editing videos. Aside from that, this tool has fast GPU and rendering capability that After Effects does not have. Thus, editing multiple videos and saving them is easy and feasible. More so, it utilizes powerful curve and sheet editor features that are staples for all current film post-production projects that require visual effects. 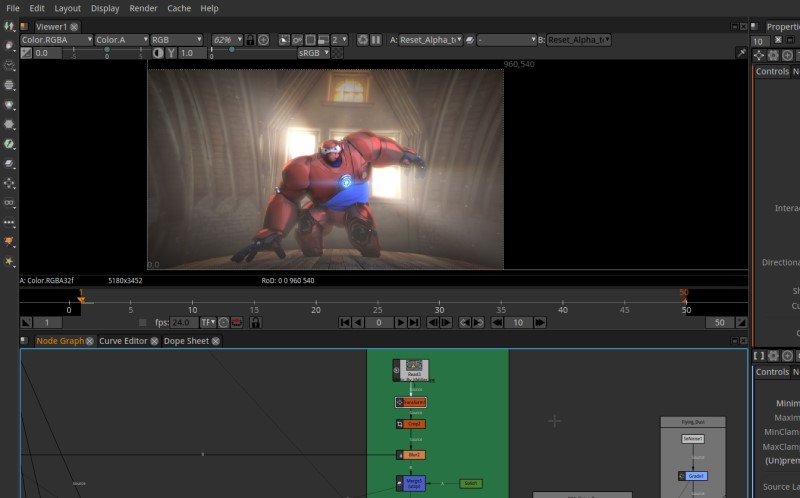 Last on the list of alternative to After Effects is HitFilm. This tool is an all-in-one video editor that enables users to edit and render edited videos up to 2x faster than other software with the help of GPU video decoding and encoding. This feature is not available in After Effects. It has a user-friendly interface and top animation and audio tools. Users can directly create dynamic and snappy edits with the help of its editing features such as crop, trim, sync, and slice that can polish the project video. Moreover, this tool can animate, import, and composite a 3D model realistically and naturalistically fits in your 2D and 3D scenes. 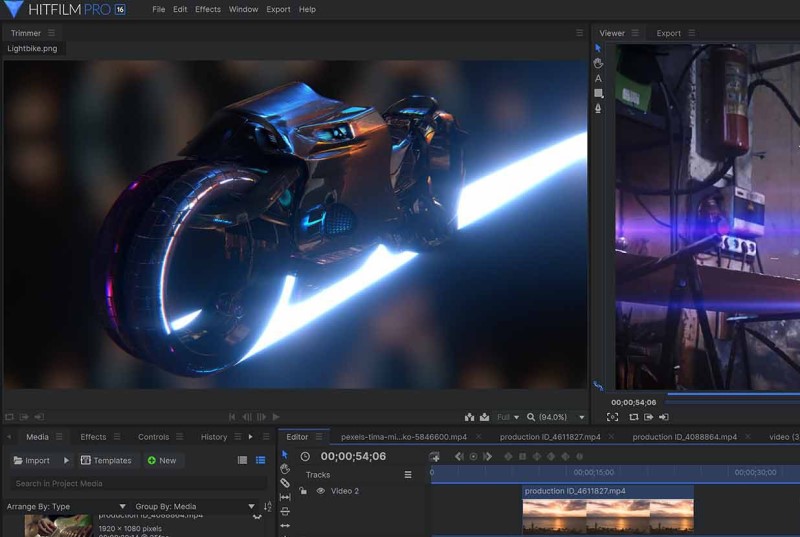 Comparison Chart of Alternatives to After Effects 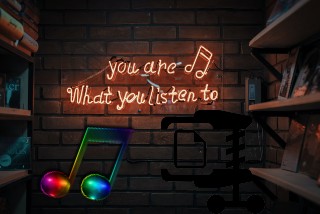 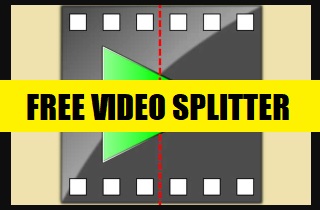