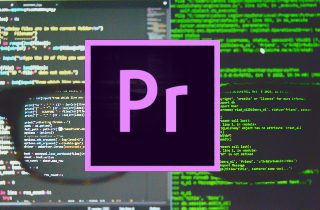 Technological advancements provide innovative methods that are useful for our daily activities. One of the most notable technologies that humans have created is the personal computer. These devices provided humans a fast solution to disseminate messages, acquire knowledge, and interact worldwide. Some of these computers are powered by different operating systems; one of these is Linux. This OS is a preeminent open-source and accessible system that also runs on embedded systems. Though Linux powers only 2.3 percent of desktop computers, it is more well-known for student computers such as Chromebooks and more. Thus, some film degree students use this operating system for their school work. Yet, due to its limited availability, some applications are not compatible enough to operate on its systems. Some of these are video editing tools like Premiere Pro. Premiere Pro is a timeline-based editing application dedicated only to Windows and Mac operating systems. Therefore, this article curated the most superior Adobe Premiere Pro alternative for Linux.

Distinctive Feature: It is designed with a frame accuracy function that enables users to show each frame of the project video, making it easier to edit.
Supported formats: WebM (VP9), AVCHD (libx264), HEVC (libx265), and more.

OpenShot is a cross-platform video editing software that is compatible with various operating systems like Linux, Windows, and Mac. Its notable feature is its curved-based keyframe functions that enable users to access an unlimited number of keyframes and animation possibilities. This feature is the reason why this software is eligible as a Premiere Pro Linux alternative. It is also equipped with basic editing functions such as trimming, merging, applying effects and enhancing video clips. More so, it is equipped with an advanced timeline editing panel that provides great features such as drag and drop function, clips alignment, zooming in and out, and others. 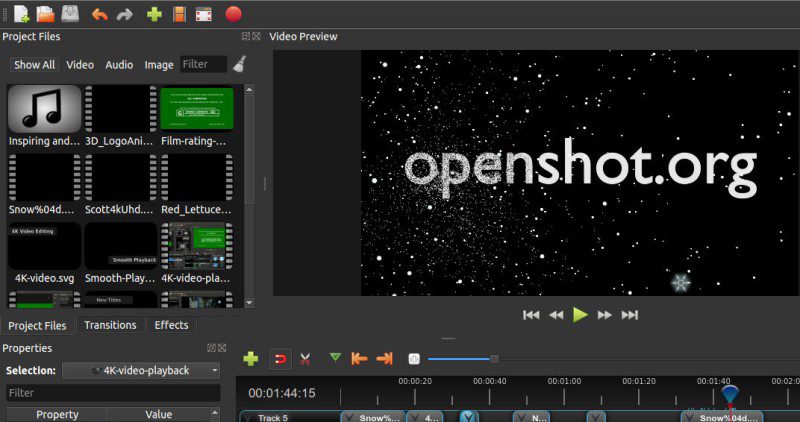 Clips on the timeline can be modified in many ways, including trimming, rotation, snapping, scaling, and more.

Distinctive Feature: It is furnished with 360-degree video filters that Adobe Premiere does not have.
Supported formats: MP4, MKV, FLV, BMP, GIF, JPEG, PNG, SVG, TIFF, and others.

Avidemux Shotcut is a free and open-source video processing and editing tool compatible with Linux, Windows, FreeBSD, and macOS. It supports various media containers such as video, image, and audio formats via FFmpeg. It also contains recording features that can capture webcam and audio systems associated with the project video. This function is lacking on Premiere Pro; thus, making it one of the valuable alternatives Premiere Pro has. Additionally, it has advanced editing processes such as de-interlacing, color grading, track composting, and more. 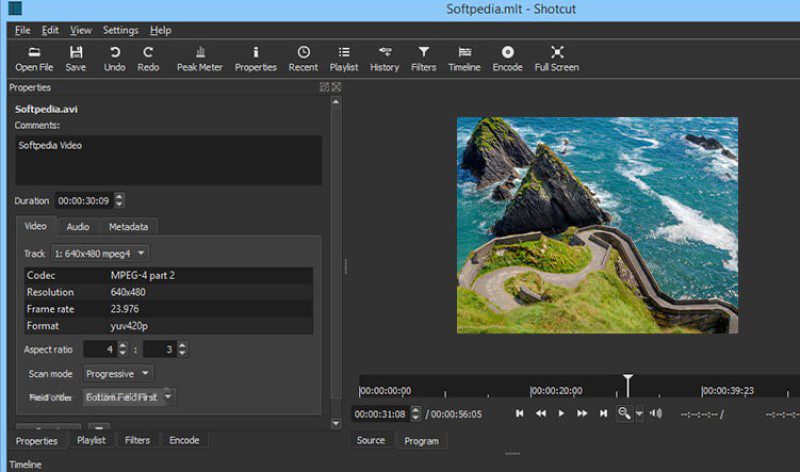 Distinctive Feature: It has the ability to insert audio streams into a project video and extract audio streams through Demuxing and Muxing functions that are deficient on Premiere Pro.
Supported formats: MP4, MKV, MPG, TS, and others.

Avidemux is open-source editing software that is capable of non-linear video editing processes. It is purposely designed for Linux, Mac, Windows operating systems; yet, there are unofficial builds suited for other OS like FreeBSD, NetBSD, and OpenBSD. It is furnished with basic editing functions like adding filters, transition effects, color correction functions, and more. It also supports a non-project system such as Virtualdub, where users can create all of their configurations and store the video file directly even without creating a project file. This feature is unavailable on Premiere Pro, making it one of the notable tools to look for. 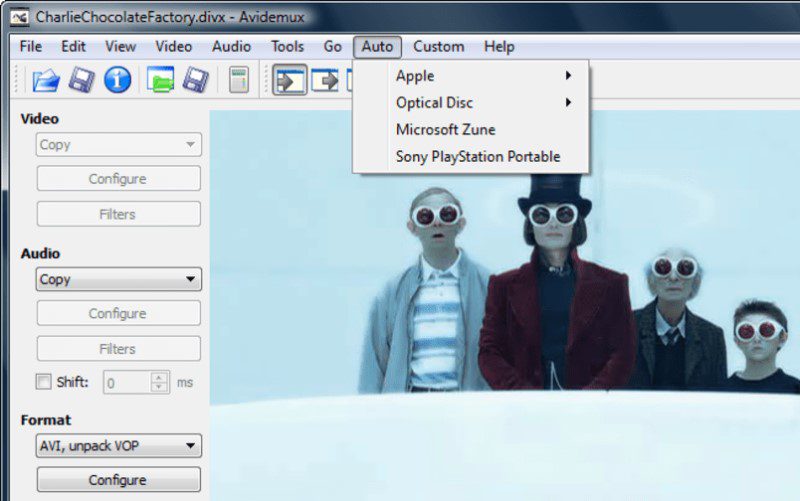 If you want to create a closed caption or add text Premiere Pro alternative, utilize its inbuilt subtitle processing.

Another alternative for Premiere Pro in Linux is Cinelerra. This tool is non-linear editing software that provides editing functions even without an internet connection. It is designed with four function windows that provide the whole editing workflow. The first window is the timeline which provides users a storyboard to drag and drop different media files. Editing processes also took place on this window. The others are viewer, compositor, resource window, which provide overall previews and analysis of the changes made on the project video. 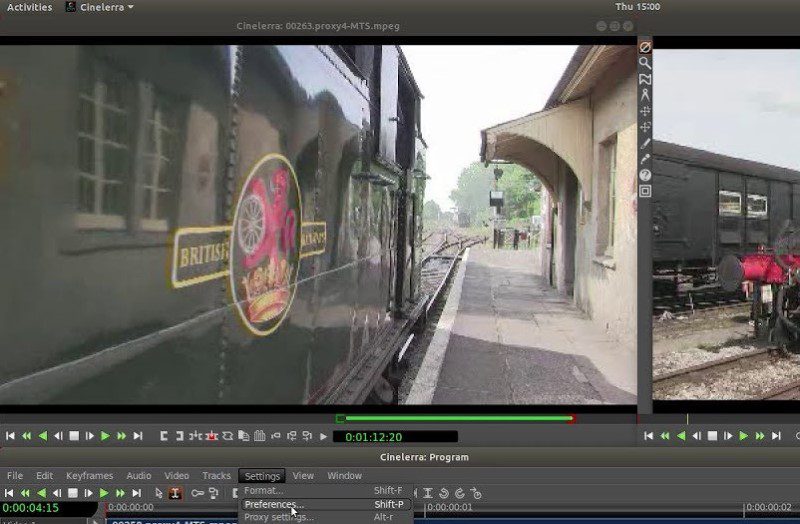 A mailing list exists wherein developers provide support and hold a technical discussion on every change made on the tool.

Distinctive Feature: It allows users to create and add customized effects and transitions to the project video. This feature is absent on Premiere Pro editing functions.
Supported formats: AVI, WMV, MPEG, and others.

Kdenlive is another free-of-charge and open-source video editing tool that equipped with editing functions. It is designed with essential editing functions like trimming, cropping, enhancing, transition, and more. Additionally, it is equipped with advanced editing functions like audio signal processing. This feature allows users to normalize, shift pace and pitch, adjust volume, reverb audio, and equalize filters. It has an archive feature wherein all exported projects and assets are stored in a single folder. This functionality is unavailable in Premiere pro, making Kdenlive the best alternative to Premiere Pro in Linux. 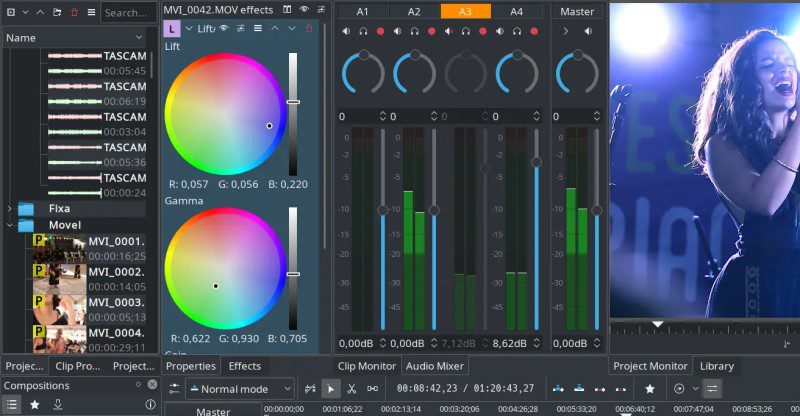 Lightworks is a video editing software that is non-linear used for enhancing and mastering digital videos. It is a notable video editor for Hollywood post-production companies due to its ability to beautify some award-winning movies. Some of these films are Pulp fiction, Romeo + Juliet, Bruce Almighty, and more. Its free version comes with basic features like real-time effects, trimming, Multicam editing, cropping, merging, and more. Additionally, it can export 720p quality videos directly on Youtube and Vimeo. This function is missing in Premiere Pro; therefore, this tool is a suitable Adobe Premiere Linux alternative. 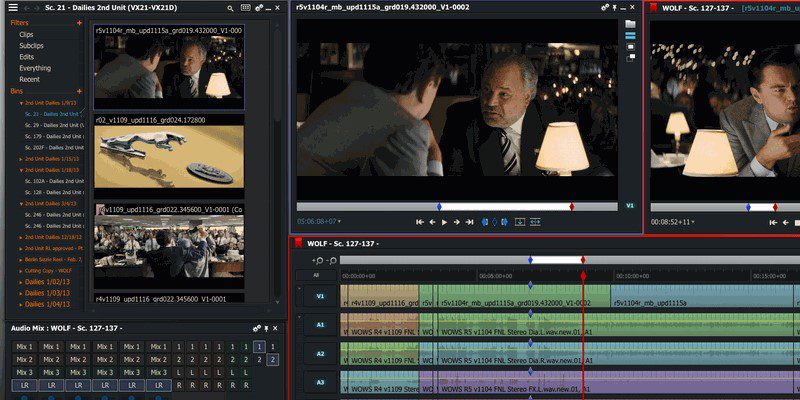 Its developers improved the performance of H.264/AVC codec in MP4 and MOV containers. Thus, editing with these formats consumes less CPU power making the process smoother and faster.

A newly produced video editor only 12 months from its release date, Flowblade can be a reliable alternative for Adobe Premiere Pro Linux. It is equipped with essential editing functions such as 50+ image and video filtering, 30+ audio filters, a built-in title tool, animation rotation, and more. More so, it has a G'MIC effect function that provides built-in commands for images processing, basic mathematical manipulation, and filtering tables. This function is missing in Premiere Pro, making this freshly produced video editor one of its alternatives. 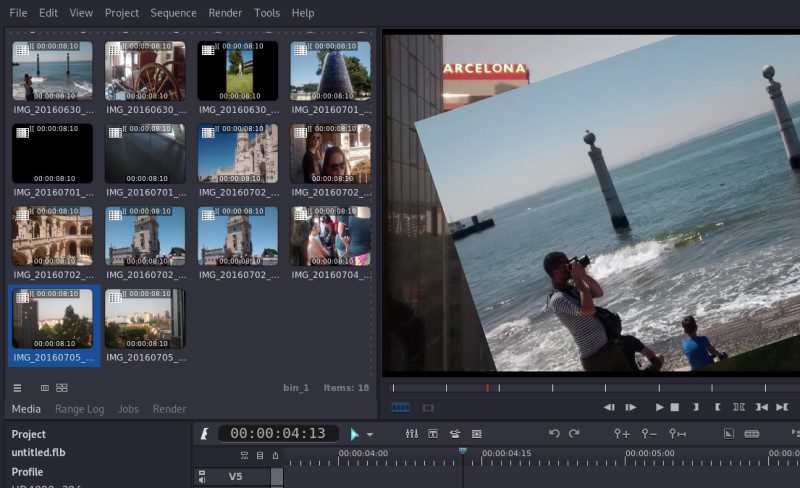 Its interface can be translated into many languages, including Spanish, Italian, French, Hungarian, and German.

Davinci Resolve is a non-linear editing software furnished with basic editing functions. It is equipped with different configurations such as color correction, visual effect, digital intermediated, and 2K resolution processing. It also supports and enhances resolutions greater than HD videos with frame rates greater than 60FPS. Additionally, it uses a face-tracking feature giving users the ability to detect facial expressions and emotions. Premiere Pro does not have this feature on its functionalities, explaining why this tool is an excellent alternative for Premiere Pro in Linux. 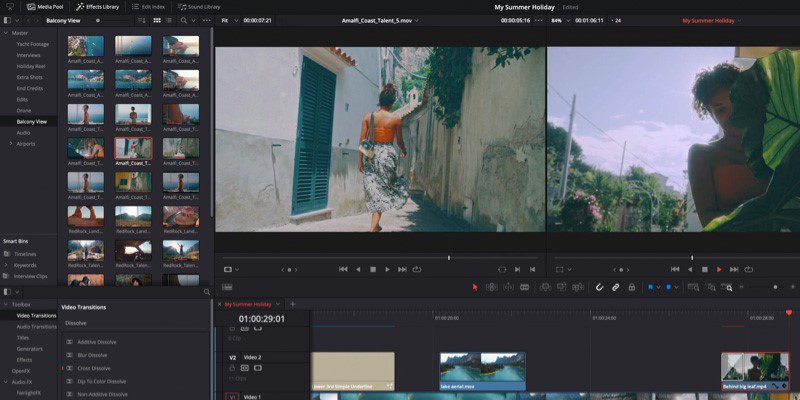 It is equipped with 3D audio mixing functionalities for different audio formats like 5.1, 7.1, and 22.2.

Distinctive Feature: It has capabilities to export and import media from the GStreamer framework of GStreamer plug-ins.
Supported formats: MPEG, Matroska, Ogg, QuickTime, WebM, others

Pitivi is an open-source and free video editing software developed for the Linux operating system. It supports simple media editing abilities such as snapping, trimming, splitting, cutting and enhancing clips. It is also capable of linking together the audio and video clips and treating them as single files. This feature will make editing files easier and faster to apply. Additionally, navigating its features and workflows is intuitive and self-documenting. It provides users all contextual hints that they need even without grasping on its user’s manual. 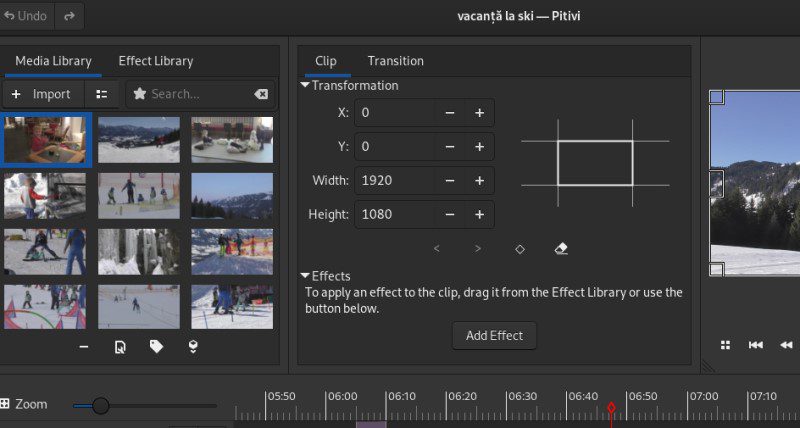 The last alternative for Adobe Premiere Linux is Blender. It is an excellent open-source tool that is well-known for its 3D modeling and animation tools. This program was created to operate with Blender's 3D features like modeling, transforming, sculpting, and more. In addition to that, it has enabled users to turn their still characters into impressive animations with its simple keyframing or complex walk-cycles. Besides, it comes with a built-in video sequence editor that grants users to perform basic actions like video cuts and masking or color grading. 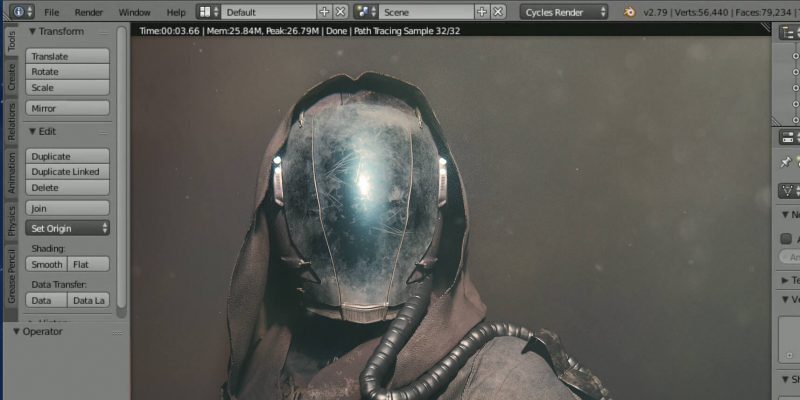 Blender may be a one-stop-shop open-source video editor for both creating and producing your work if you're interested in 3D animation; it also works with standard video clips.

Traits that Every Film Editor Should Have

Video editing is a fun hobby to do. It stimulates your creativeness, resourcefulness, and analytical thinking. However, this task is not only for video enthusiasts; it can be a full-time profession. In 2020, a study was conducted, and they projected that the global revenue of film-related careers was estimated to be about $50 billion. Thus, making the industry have better career opportunities. Although having a good eye and natural talent is vital in this industry, they are not the only qualities that matter. Thus, we have collated the top five traits you need to possess.

1. Patience - Video editing is a tedious process. It is crucial to master and accomplish each task effectively, and it consumes much time. Whether you are waiting for your project video to finish rendering or dealing with a difficult client, a good video editor should have this trait. Patience is not only a virtue - it is a must.
2. Ability to Work Under Pressure - As a video enthusiast, you will find yourself in a time crunch. Video editing is not ideal for those persons who cannot perform under the gun. Keeping your cool under different pressure is an absolute ideal for this kind of profession. Thus, it is essential.
3. Excellent Time Management- An efficient video enthusiast should keep a good pace and better understand their workflow. When it comes to editing, schedule and timing are everything.
4. Emotional Depth - To be an effective video maker, you need to have a great capacity for human emotions. It would be ideal if you were more connected on how the stories of your project video should be presented.
5. Stellar Communication Skill - Video editing cannot be done by a single person only. It would be best to communicate better with your members, actors, directors, and staff to create a cinematic and professional-looking output. As they say in a quote, "no man is on an island." 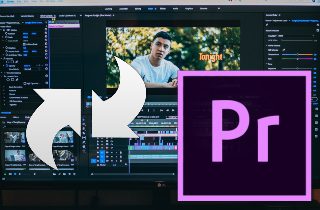 Must-See Ways on How to Merge Clips in Premiere Pro 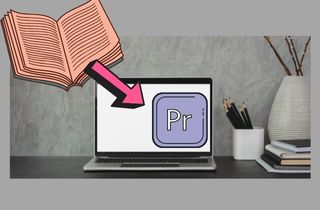