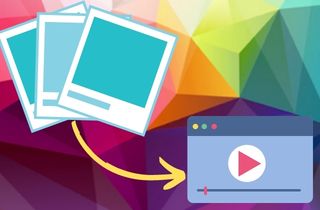 As video enthusiasts who have better knowledge of video creation, we all know adding images impacts our output video. If you are an influencer, videos and images directly link to content monetization. These mediums get your viewers' plenty of attention and encouragement to finish the whole video. That is because images on videos correlate with brain processes. We usually tend to remember photos like product logos, watermarks, and trademarks. Thus, add photo to video is a must process to create engaging video output. Yet, photos can also be distracting; a misplaced photo on your project can drive viewers to exit your videos. Therefore, you need to know better tools for inserting still images on your project videos. We itemized them below; read through to know each one of them.

Best Way to Add Pictures to Video on Windows/Mac

Distinctive Feature: It has inbuilt and free background images that users can use to add pictures to their project video.
Supported Formats: MPEG, MP4, WMV, MOV, and many more.

AceThinker Video Editor is a stunning movie editor that can combine and turn videos and images into cinematic videos. Whether you want to make an education tutorial, a family movie, or a game demo, this tool will aid you right. It uses a timeline editing panel to insert images on a video and turn them into a single output. In addition, it can import photos captured on your smartphone, camera, and even web camera. It also has different editing functions to enhance video and images. These features are trim & cut, split & combine, crop & rotate, and more. What is more, this video editor for YouTube has inbuilt 40+ adorable filters suitable for all media inputs.

Underneath is the guide on how to insert a picture into a video with AceThinker Video Editor:

The initial walkthrough to effortlessly add image to video is to install AceThinker Video Editor on your computer. Click any of the download buttons presented below to continue with the guidelines. Once you have acquired its installer, run and pass through the prompts to fully instate the tool on your computer. Then, launch the tool to acquaint yourself with its functions and navigation. Doing this will provide you with an excellent workflow process.

The succeeding guide is to import your video and photo files on its system. You can do this by going to the media tab and hitting the import button. You can select different import options on its dropdown menu. These are import files, import folders, and even import subtitle files. Suppose you have selected the import folder option. The tool will have access to your computer's folder. Locate your media files and select the designated folder. After, hit the OK option to add media files successfully. 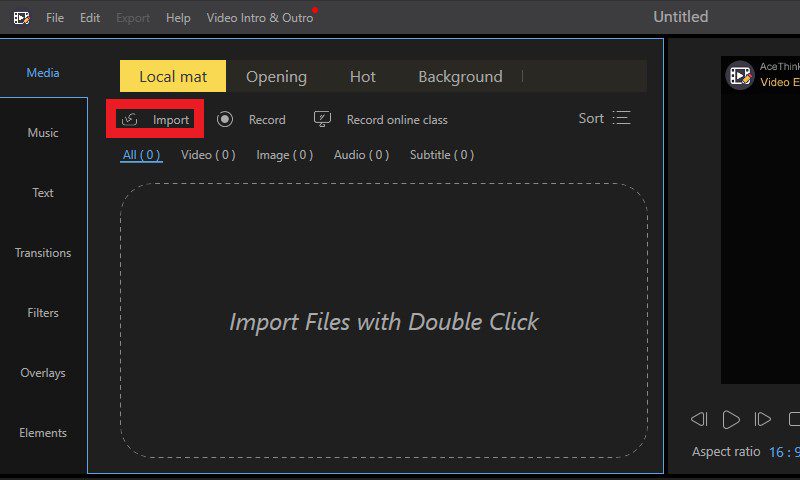 Drag and drop the media files on the timeline editing panel once the media files are imported. You can add the image at the end of your video clip and use the picture-in-picture process. This process will make the video stream while the picture is shown on the same frame. You can also resize and trim the image to perfectly fit it on the project video. Afterward, utilize different enhancing features to beautify the video. 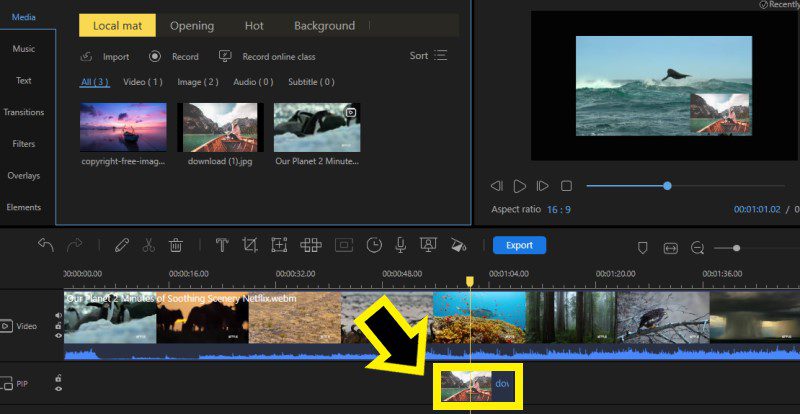 Step 4 Export and Preview the Video

The last guide to follow is to click the export option to save the changes made on the project video. The process is expeditious, and a notification will inform you if the video has been saved. On that, locate the exported video in its appointed folder. Click and play the video to check the changes made. To add an image to another video, utilize the walk-though presented above.

One Alternative Way to Add Pic to Video

Distinctive Feature: It uses the picture-in-picture function to overlay photos and video on your project video.
Supported Formats: M4V, MOV, MP4, and others.

iMovie is an eccentric video editing utility that Apple Inc developed. It offers different essential editing functions; one of these is adding photos. Its timeline editing panel also lets users add still images at the end of a particular clip to include them on the output project. In addition, it can enhance the video with its inbuilt video filters and add background music to iMovie. What is more, this tool has intuitive navigation; all functions are comprehensive enough for new users.

Below is the listed walkthrough on how to put a picture on a video in iMovie.

How to Insert Images to Video Online

Distinctive Feature: It can import multiple video and image files and merge them as one project output.
Supported Formats: MP4, WMV, MOV, VOB, AVI, and others.

Clideo is an extensive online video utility that provides different video processes. One of its functions is merging videos and images in a single output. It can merge video files without losing their original quality. Thus, creating a lossless merging process. Additionally, it is designed with different transition effects such as crossfade. What is more, this tool can edit the duration of the image up to one minute of frame exposure. Moreover, it enables users to add audio streams to the project video to elevate the mood of the project video.

The listed steps shown below are the guidelines on how to add pictures to video:

Kapwing is a helpful video utility that has web-based functions and features. One of its abilities is to add an image to a particular video. Other than that, it can also import photos taken from your camera, webcam, and smartphones and associate them with the project video. It is equipped with different editing functions such as resizing the corners of the image, adjusting the photo, and modifying its frame exposure. Furthermore, it can share the output video on different platforms such as Facebook, YouTube, and more.

See below the listed guidelines on how to insert a picture into a video with Kapwing: 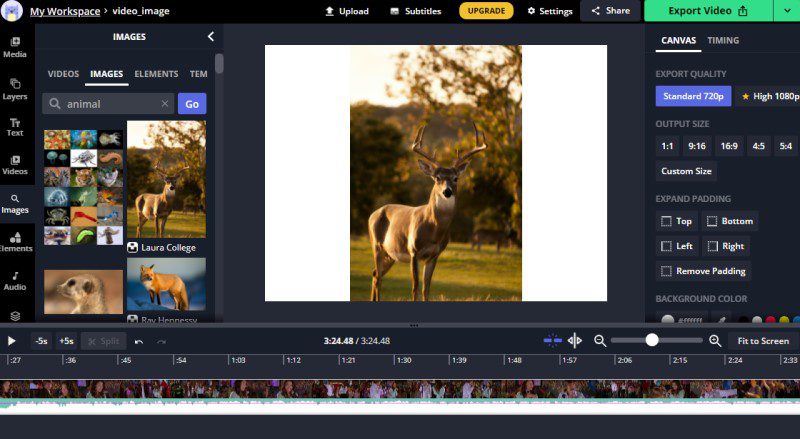 How to Add Photos in Video in Mobile

PowerDirector is a cross-platform video editing software that is compatible with mobile devices. Whether creating a cinematic movie on your mobile phone or just editing your Instagram story, this tool will help you. It uses a timeline editing panel to merge and attach photos to the project video. Additionally, it has exclusive editing content such as filtering, transitions, and video effects that can beautify the merged photo and video files. What is more, this tool is equipped with new keyframe controls that can adjust the transparency, picture-in-picture function, and rotation.

See the listed steps to know the better ways on how to add image to video with PowerDirector. 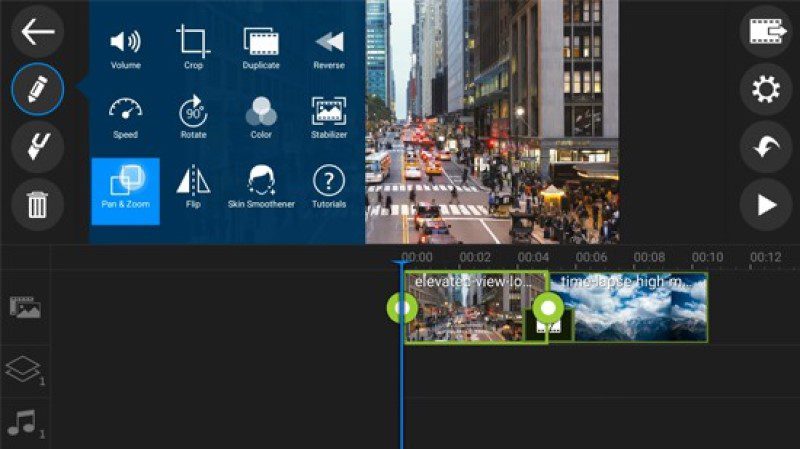 Distinctive Feature: It has an intuitive function for a mobile application. All of its editing buttons are located at the rightmost part of the tool.
Supported Formats: MP4, WMV, AVI, MOV, F4V, MKV, TS, 3GP, MPEG-2, WEBM, GIF, and MP3.

FilmoraGo is a full-featured video editing software compatible with iOS and Android devices. It is equipped with essential editing features, including merging photos on a project video. With its timeline editing panel, adding photos is seamlessly possible without reducing the quality output of the entire video project. In line with that, this editor can edit videos with 4K resolution without distorting their original quality. You can also add the pictures taken from your mobile phones and import them directly on your project video. What is more, this tool supports different local music stored on your mobile phone. This feature can add your voice-overs and recorded audio from your mobile device.

Look below the listed steps on how to add photo to video using FilmoraGo:

Adding photos can be valuable and attractive to your project video. With this technique, you can also use still images to freeze-frame different sequences on the edited video. Below are the listed films that used still images or frames to create freeze effects 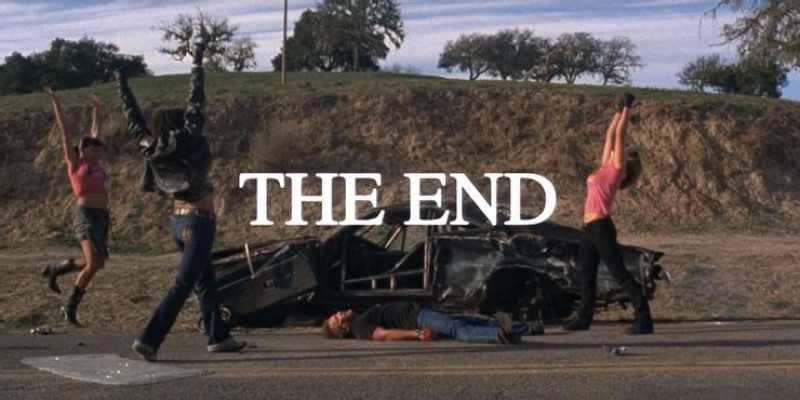 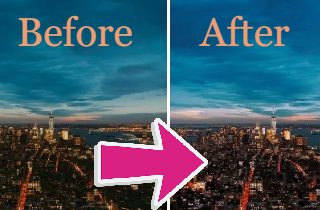 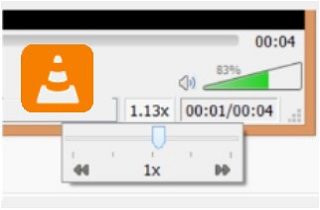 Unique Walkthroughs on How to Speed Control in VLC