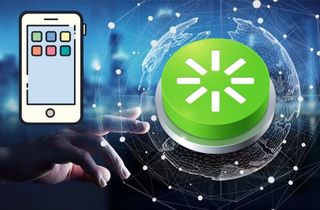 Apple innovated our perspective on choosing the ideal smartphone we want to use for our daily routine. With its chic and glamorous design, it is one of the most anticipated brands we have for mobile devices. Not only that, this gadget offers a great system that enables users to perform quick functions. These include storing contacts, messaging, installing third-party applications, browsing the internet, taking photos, and watching videos. Although it provides a better and more convenient way to perform this task than its mobile counterparts, this device also comes with a little glitch in its system. Visit and read on different forums, including the Apple Support forum. You will see a variety of complaints about various bugs and glitches. Even though these errors can be solved by simple reboot and troubleshooting, data loss is inevitable with these functions. We don't want that, we know; that is why we have collected the best iPhone hard reset software dedicated for your device.

Distinctive Feature: AceThinker iOS System Recovery is an efficient tool to reboot iPhone devices without losing files and data. This is possible with its standard mode of recovering and fixing iOS issues, which provides a quicker and better process without the fear of deleting your iPhone data.
Price: It is a freemium service that provides essential repairing functions. However, if you want to alleviate your experience with its advanced options, you can avail of its premium pass for $31.95.
Supported iOS Versions: It supports and caters to iPhone devices that run iOS 15 at earlier versions.

Are you looking for the best among the ideal iPhone reboot software that brings out a quicker process to reboot your device? Its central core is the ability to fix 50 common iOS-related issues. This error includes the iPhone keyboard not working, being stuck in DFU mode, iPhone screen freezes, and more. It is a free service. Yet, a premium subscription is available for you to avail. This subscription can be used for two PCs with lifetime support and endless upgrades. This feature is its upper hand over other similar recovery tools. In addition, it consists of two modes to perform the recovery and reboot process. You can reboot your device using the Standard mode, which enables the user to fix the iOS system without data loss. It helps users return their iPhone device to its original function without jeopardizing any system and files. 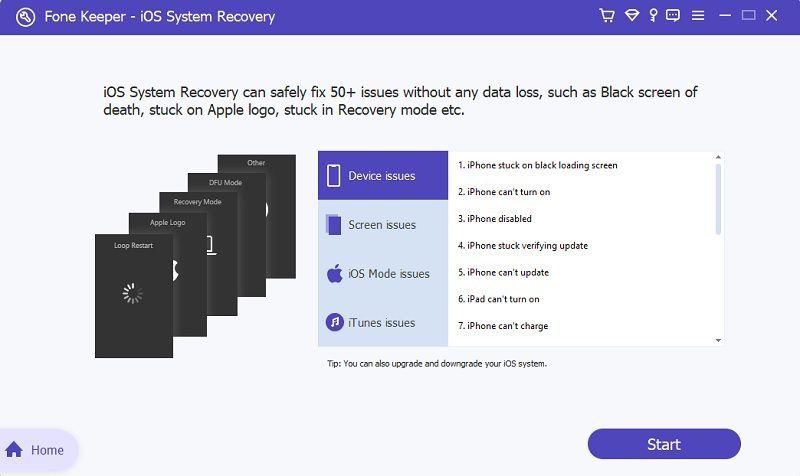 Distinctive Feature: It can fix iPhone issues, including Apple TV errors.
Price: It costs $39.99 for an annual plan with 24/7 customer support.
Supported iOS Versions: It can fix iOS 15-related issues even in the earlier versions.

Do you need to reset your iPhone to factory settings without the help of iTunes or a passcode? You can perform that without losing data to fix your device. Generally, you do not need to perform the reboot process for fear of losing your data files. AnyFix caters to over 130 system failures and fixes them as quickly as possible. Additionally, its advanced repair provides users more power to fix troublesome firmware. These errors include an iPhone stuck on the Apple logo, your device won’t update, and it stuck on the reboot option. With that, rebooting your device is no longer a frustrating task when your device fails to function normally. 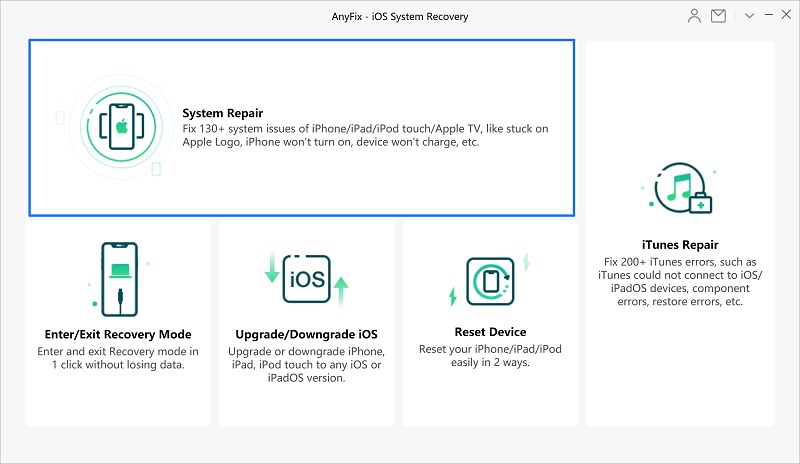 Distinctive Feature: It is designed with the ForceRestore option to fix corrupted backups. It also creates files required for successful backup once you reboot your device.
Price: Its premium plan costs $49.99 for one year plan for one PC only.
Supported iOS Versions: It can fix iOS devices that run lower system versions, including iOS 14, 13, and earlier versions.

An all-around iOS utility, PhoneRescue For iOS, suits you to reboot your device without the distress of losing your files. It is based on custom-designed technology that provides a better reboot process. It can fix common iOS-related issues, including iPhones stuck in the White/Blue/Black screen of death, devices frozen, and more. So, when you are in a situation where your device suddenly malfunctioned, this tool can aid you in fixing it without the anxiety of not doing the backup process. What is more, it is equipped with NO-Data-Loss technology where; it can recover iPhone files that have been eradicated during your reboot process. 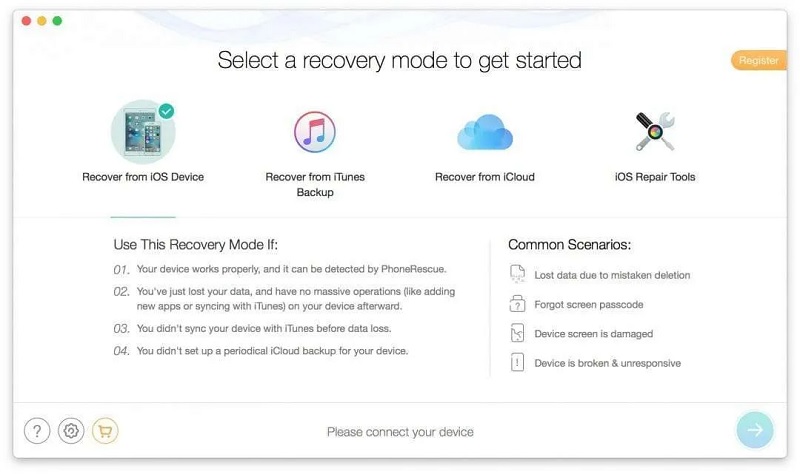 Distinctive Feature: It has a function that allows users with a 1-click feature to enter and exit recovery mode.
Price: Its one-year license costs $35.95 with one year of free upgrades for 5 PCs.
Supported iOS Versions: This iPhone reboot tool can support all iOS versions, including the latest, which is iOS15, and earlier versions.

One of the most popular iOS reboot software, Tenorshare ReiBoot, is a secured and easy-to-use program that enables users to fix a variety of iOS-related issues without losing a single byte. These issues include the iPhone being stuck in the Apple logo, the iPhone swipe-up not working, iCloud not syncing, and other serious problems. Its main selling point is to downgrade iOS versions without jailbreaking while retaining your iPhone data. It supports almost all iPhone devices, including the iPhone 13 series. Furthermore, it can recover and reboot Apple TV, which is rarely featured for iOS utility programs. 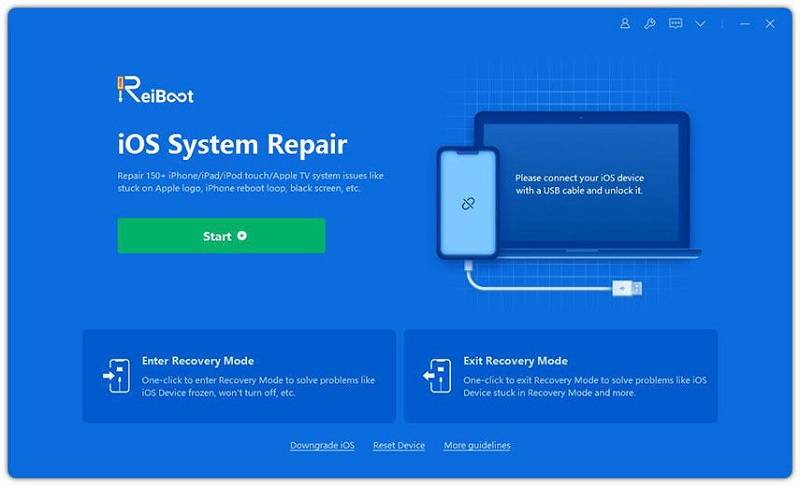 Distinctive Feature: It is a lightweight iPhone recovery that gives reboots iOS system without the fear of losing data.
Price: Its monthly subscription costs $6.65 for five PCs.
Supported iOS Versions: This tool works for all iOS versions, including the latest iOS 16 beta.

Dr. Fone - System Repair is a trusted iOS recovery tool that is an incredibly friendly user with comprehensive and well-managed navigation. It can fix the most common iOS fallacies jeopardizing your device's actual process. These problems include a black screen of death, being stuck in recovery mode, the iPhone frozen, your device restarting, and others. This tool usually performs the system recovery mode or reboot without losing data. Even in some cases, it can delete files; this tool is equipped with a recovery mode that can easily retrieve the lost data on your iPhone while rebooting. 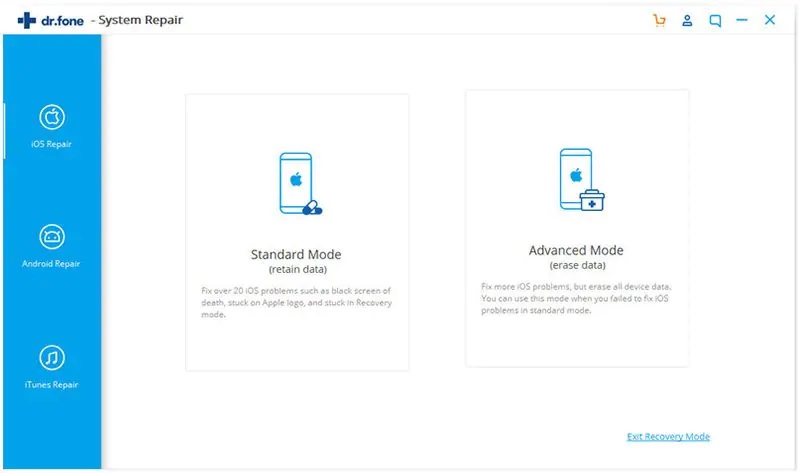 Distinctive Feature: It has a quick fix feature that removes software glitches and bugs without losing or availing of a premium subscription.
Price: Its subscription costs $41.97 per year for six devices with one year of free upgrades.
Supported iOS Versions: This iOS reboot tool allows users to repair devices running with iOS 15 and later versions.

FonePaw iOS System Recovery is another good iOS recovery tool that deals with common issues of the iOS system. It consists of three repairing modes: the Free Quick Fix function, the Standard mode, and the Advanced mode. The Free Quick Fix option is applicable for common iOS failures which do not need a reboot or factory reset. The Standard mode helps users fix their devices' most serious problems and issues without losing data. The latter is the Advanced mode which can deeply scan and repair system errors and vulnerabilities. However, this mode can erase the data files you have on your iPhone. So it is recommended to use the Standard mode instead or backup your files before using it. 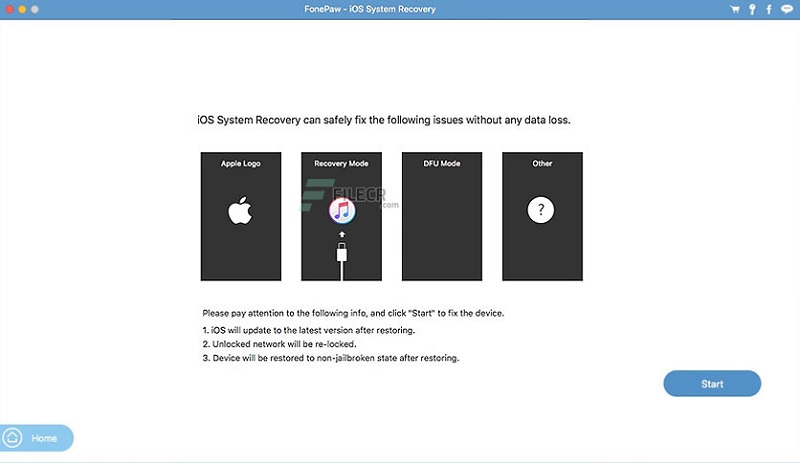 Distinctive Feature: It is designed with a dual repair mode that can fix iPhone-related issues.
Price: Its lifetime license can support 2-5 devices with free support and upgrade for $49.95
Supported iOS Versions: iOS 15 and earlier versions are supported with this tool.

Like much other software on the market, JoyoshareUltFix is considered one of the most valuable tools. The resolution provides to fix iPhone devices, and this is commonly used to repair minor glitches and software bugs. Nevertheless, it is also designed to fix and solve major iOS-related issues without losing data files. These errors include being stuck in a boot loop, being stuck on connecting iTunes, freezes in the white Apple logo, and others. Additionally, this tool can fix a failed restore process to thoroughly remove errors and turn back the system to its original function. 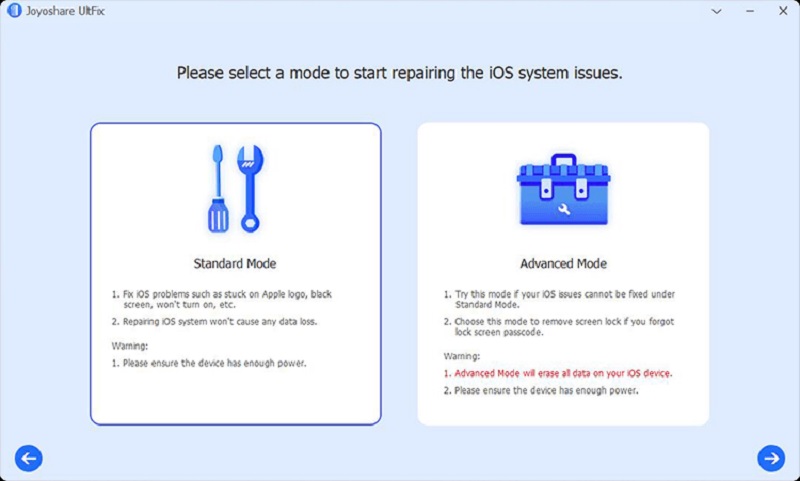 Distinctive Feature: This tool is designed to provide a better iOS utility that fixes, recovers, and restores the iOS system.
Price: Its yearly subscription costs $69.95 for one PC only.
Supported iOS Versions: It works and repairs iOS versions like iOS 15 and earlier.

iSkysoft Toolbox is a renowned iOS system utility that provides quick-fixes while retaining iOS data. It is an all-in-one mobile solution for iOS devices that fix almost 50 common errors. These errors and problems include iPhone stuck on loading after restore, fix a bricked iPhone, and others. Not only that, this solution is equipped with different processes, including batch repairs of videos and photos, restoring video files in different formats, and more. What is best is this tool can fix and resolve iOS system issues with 100% secured and safe processes. Personal data and files will be kept on where they should be stored. 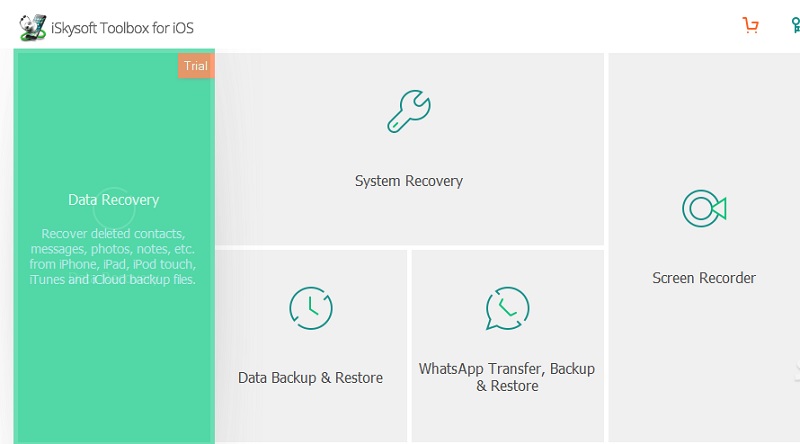 Distinctive Feature: For almost all iOS reboot tools, this tool reboots devices faster than its other software counterparts.
Price: It has a one-time payment to achieve its advanced features. The plan costs $39.99 for one PC with a lifetime upgrade and support.
Supported iOS Versions: This tool can reboot iOS systems with outdated iOS versions, including iOS 13, 14, and later.

Lastly, a well-reviewed tool to fix iOS system is PrimoSync iPhone Data Recovery. It can fix iOS systems with an array of solutions presented on this tool. It can resolve iOS-related problems, including the iPhone camera being blurry, Apple Music skipping songs, iPhone being stuck in headphone mode, and more. Additionally, this tool provides a safe and secured reboot process making your files secure and will not be jeopardized. 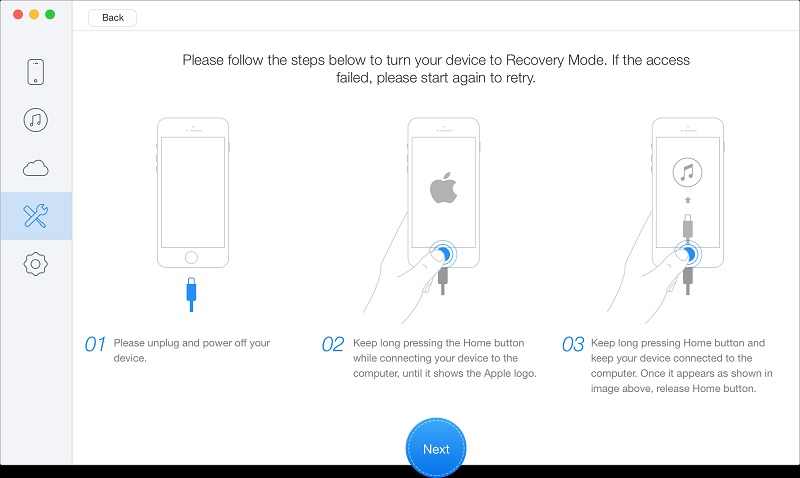 Distinctive Feature: It is an expert on fixing system glitches without data loss.
Price: Its lifetime license costs $29.99 for one PC.
Supported iOS Versions: It supports iOS 15.4.1 and other earlier versions.

Last on the list of iPhone hard reset software is Fix My iPhone. This tool is concocted with a function to fix 5+ iOS-related issues without losing files. Whether your device experienced an iPhone stuck on the Apple logo, iPhone screen freeze, or the device won’t turn off, this tool can resolve the issue immediately. It is also designed with a 1-click function to exit and enter recovery mode. Although, the tool can reboot and reset your device without 100% assurance that your files will be saved. It is designed with recovery mode where you can restore files that were lost while doing the reboot process. 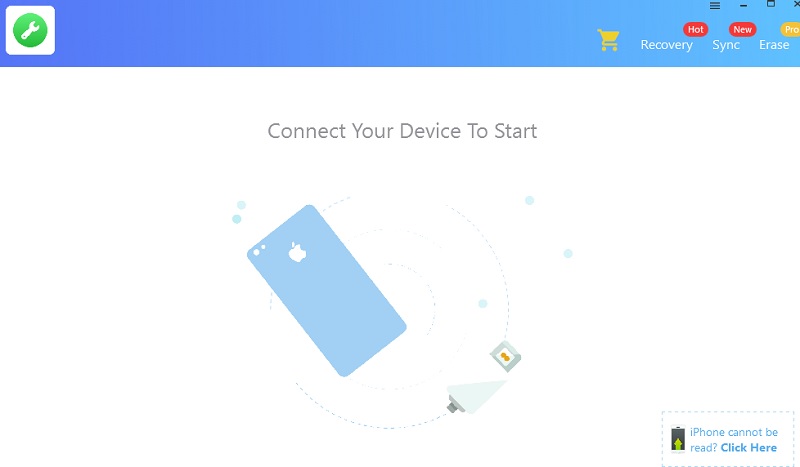 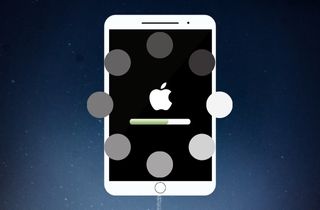 iPad Stuck in Boot Loop? 6 Useful Ways to Fix it