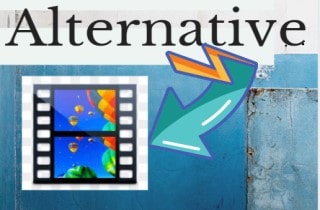 As the technology developed and innovated, people were exposed and engaged in different multimedia technologies. One of these technologies is video editing tools. These kinds of technology have been utilized and used due to the massive impact of video-sharing platforms such as YouTube, Facebook, Vines, TikTok, and many more. People often use the Windows Movie Maker since desktop Microsoft Windows is the most commonly installed OS on laptops and computers. At roughly 77% and 87.8% globally are Windows OS users. Windows Movie Maker was part of the essential software of Windows OS due to its ability to create and edit videos for vlogs, photo slideshows, and even film creation. This tool allows users as well to share videos on different video-sharing sites such as Facebook, Windows Live Group, and more. However, this software was discontinued to include on the Windows operating system because the developers did not achieve the success they expected for this software. Nevertheless, this article will provide an alternative solution to provide a list of software like Movie Maker that you can still utilize to edit video.

AceThinker Video Editor is a powerful and flexible tool to use as a Windows Movie Maker replacement due to its understandable navigation and updated functionalities. Whether you want to make an educational tutorial, software review, family slideshow, business promotion video, this will not let you down. It offered an abundance of editing features. One of these is split and combine. This feature can cut a long video into smaller video clips, and you can keep the pieces you wanted to combine or merge in one video. Additionally, it can adjust video brightness to a diverse style to have a better overall look on your video. The awesome thing about this software is, you can import videos that you acquire from different sources, such as recorded from the phone camera, downloaded on video sites, recorded on webcam, etc.

Walkthrough on how to use this software like Movie Maker.

First, download the AceThinker Video Editor by clicking the download button below. Finish through the installation wizard and wait until your device installs the software entirely. Once done, familiarize yourself with its functionality and navigation. 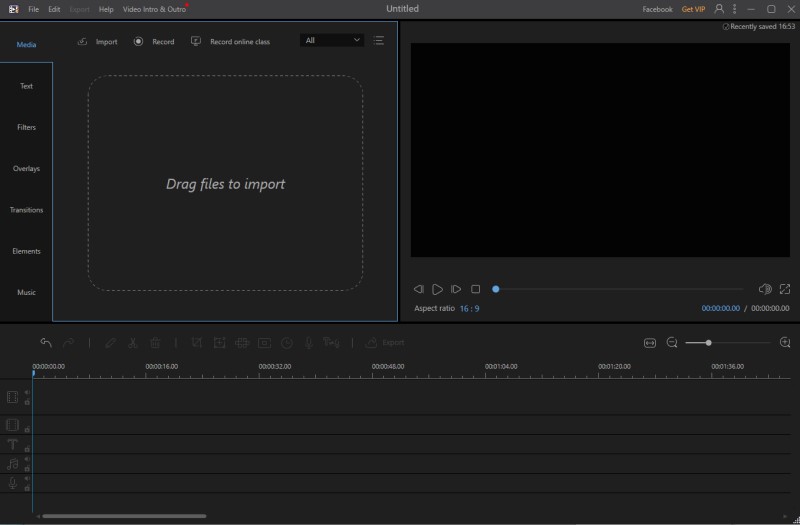 Secondly, once installed, access the software to create your new video. Utilize its features such as import videos, video trim without watermark, insert texts, and add filters, input overlays, and more. Additionally, you can also import multiple video clips to merge into one video output. Once finished, click the export button to save the edited video. 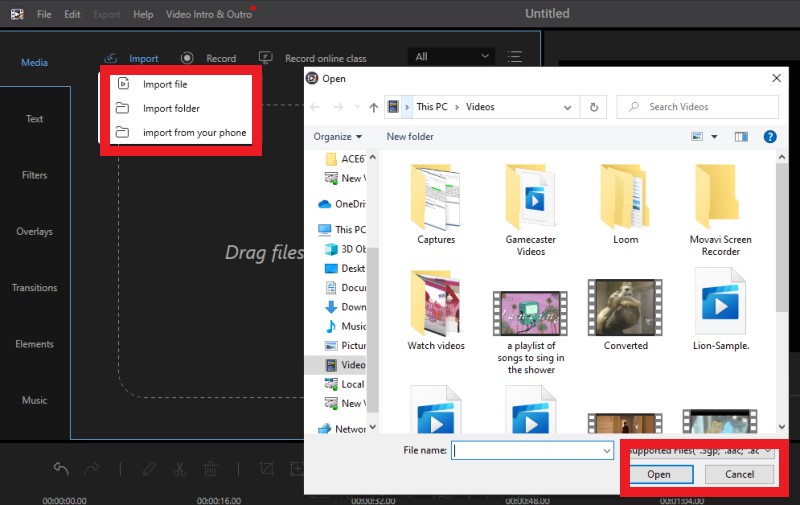 Finally, once exporting video has finished, click the open file location button, and it will automatically direct you to the output folder. Then, double-click the video to preview and play the exported footage. To edit a new video, follow through with the steps mentioned above on this walkthrough. 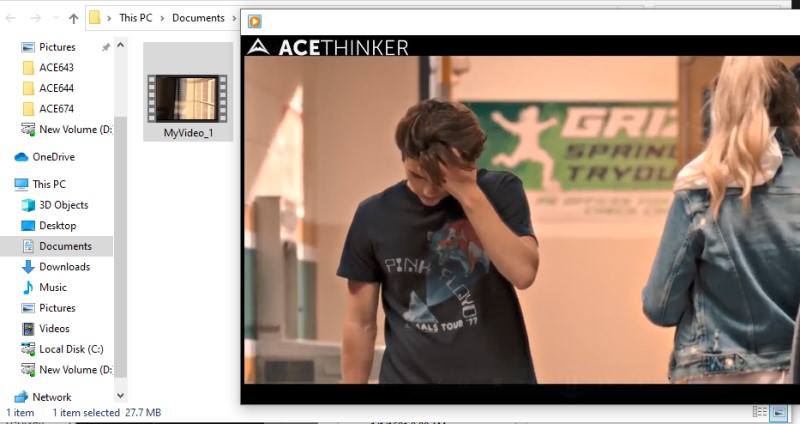 VideoProc is another software that can be used as a Windows 10 Movie Maker alternative to edit and create new videos at a full accelerated speed. It utilizes advanced technology that enables users to have a smooth video editing and transcoding process without compromising the quality of the video. Additionally, it is equipped with basic video editing features such as cutting footage, merging video clips, modifying the aspect ratio, and resizing the video. Aside from that, this tool allows users to apply preset video effects such as Grayscale, Painting, Mirror, and more, making the output video better and enhanced. 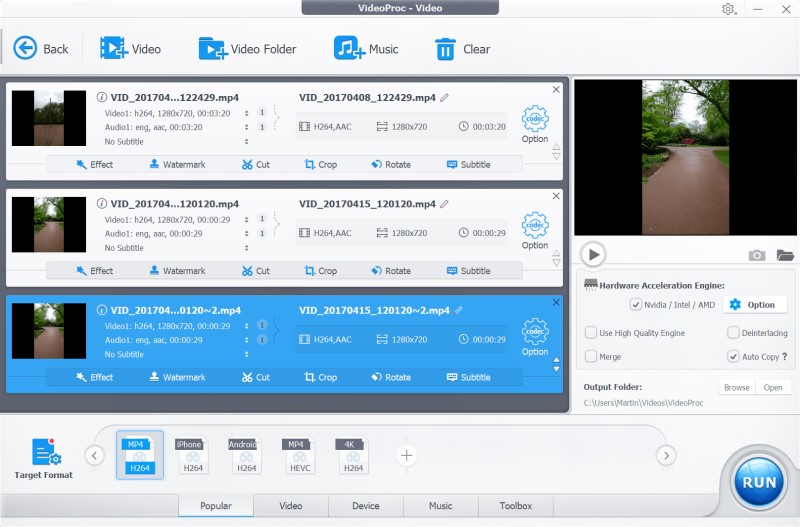 Edius is a video editing software package that is intended for PCs running Windows operating systems. It is considered one of the great Windows Movie Maker substitutes due to its non-linear editing feature that can edit media files such as video, audio, and images without relying on the internet. This tool is most famous for its 3D editing features that can make your video solid and exceptional. Aside from that, this tool offers background rendering making the workflow creative, smooth, and virtually unstoppable. Moreover, it can import, edit and export High Dynamic Range (HDR) videos in a most more straightforward and user-friendly way without compromising its original quality. 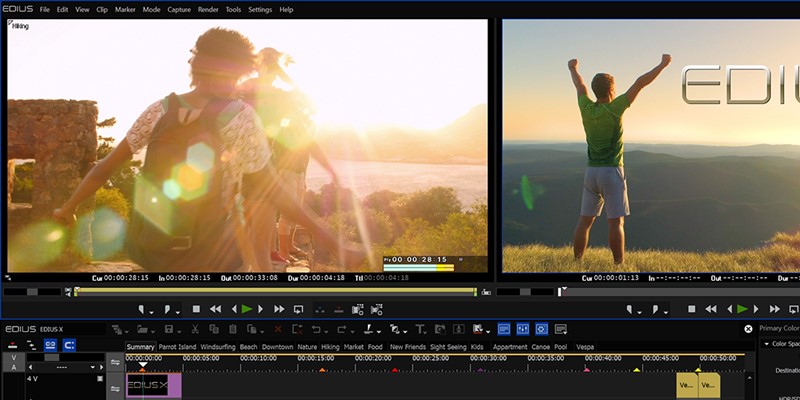 Price: It is available as a free application and as a Pro version, costing $19.99.
System Compatibility: Microsoft Windows 2000/XP/2003/Vista/Win7/Win8.
Supported Output Format: It supports 20 video formats such as WebM, AVI, QuickTime File Format, Windows Media, and many more.

One of the software similar to Movie Maker, VSDC Free Video Editor, is a non-linear video editing program that is equipped with reliable editing features. One of its features is it can make multiple layers of footage that can be blended into a single composition. It also has a powerful chroma key tool that can remove green background and input incredible background scenes and settings on the project video. More so, it has essential editing tools such as zoom, charts, 360 video editing, and color correction that can amplify and enhance the output video. 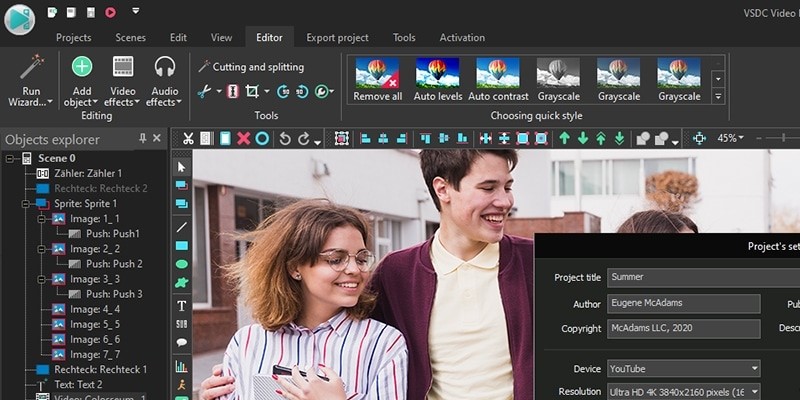 Price: Free
System Compatibility: Linux
Supported Output Format: It supports FFmpeg or libav (such as QuickTime, AVI, WMV, MPEG, and Flash Video, among others), and many more.

Flowblade is a non-linear multitrack video editing software that is the best alternative to Windows Movie Maker for the Linux operating system. It has standard editing tools and a configurable workflow that makes adding, trimming, and moving clips a breeze. Aside from that, it can combine and mix images and audios with its robust feature perfect for making a slideshow, picture show, and lyrics videos. Also, it has a color correction tool that can modify the saturation and brightness of the video and images to suit your vision and get the right mood for your videos. 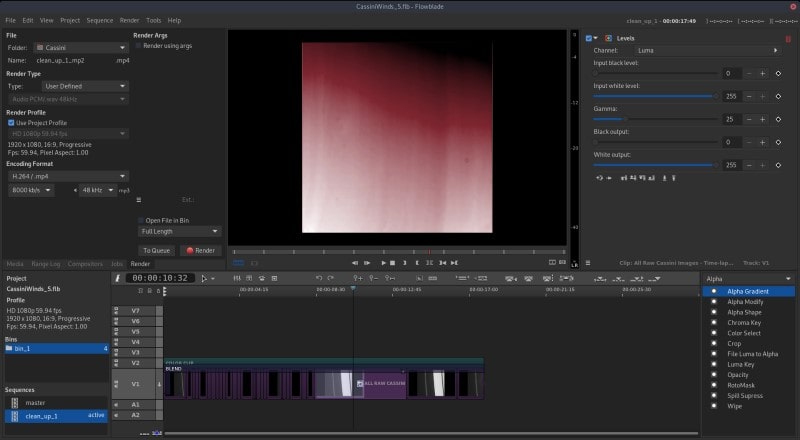 Losslesscut is a Windows Movie Maker free alternative video editing software that is equipped with essential editing features. One of its core functions is concatenating multiple tracks, which the user can input into the same codec parameters. It can also separate subtitle tracks or audio tracks from video, and it can add new soundtracks. Additionally, its cutting features are perfect for reassembling scenes in selectable order. Furthermore, it can automatically save the cut video clips in CSV format and import forbye export cut video clips. More so, it has a zoomable timeline with annotation of the jump functions and reference frames. 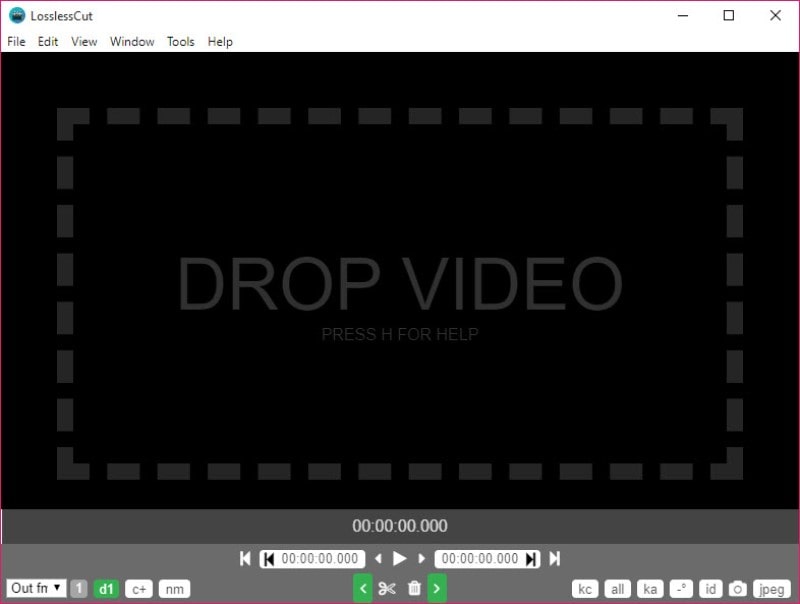 Magix Movie Edit Pro, best known as Magix Video Deluxe in Europe, is software like Movie Maker that has been developed for semi-professional and DIY users for Windows PC. It is the best-selling editing software in Europe due to its user-friendly navigation and rendering stability. It is equipped with a vast number of editing functions such as storyboard and timeline-oriented editing, freely adjustable user interface, video background changer, scrubbing, and more. In addition, it can do batch processing of the video and enables users to work on multiple project videos. Lastly, it provides a Keyframing feature allowing users to have smooth starting and ending points of transition of the videos. 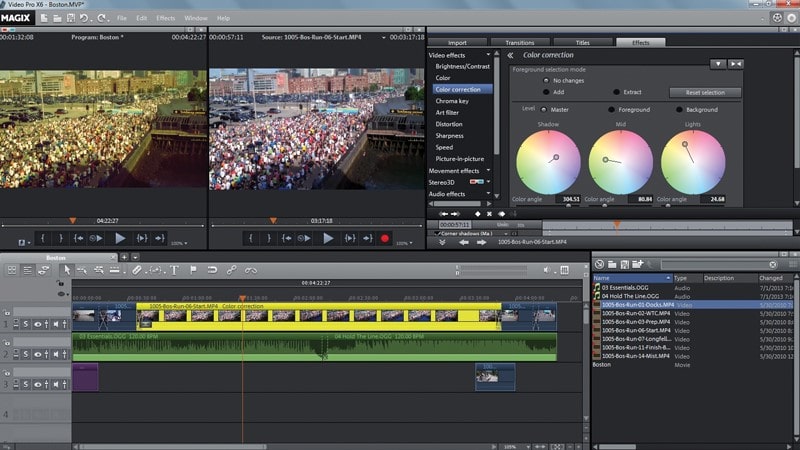 Adobe Premiere Pro is video editing software that can serve as Windows Movie Maker equivalent that supports high-resolution video editing features up to 10,240 x 8,912. It has core functions of editing, importing, and creating new videos which can be exported to different latest formats. When utilizing this tool, various videos and still photos can be edited together. Furthermore, titles can be added to footage, and filters can be applied along with other video effects such as Black and White, Color Pass, RGB color correction, and more.

Kdenlive is the best solution for Windows Movie Maker replacement due to its lightweight and device-friendly features. It has specific editing features with its polished and easy-to-navigate user interface. This software is compatible with low-grade devices; thus, it can work smoothly on older versions of different operating systems. Aside from that, its core functions enable users to trim videos, adjust soundtrack volume, modify playback speed, and more to provide better outcomes on the video. More so, its vast number of filters and effects are readily available to insert into the footage to enhance the scenery and mood of the edited video. 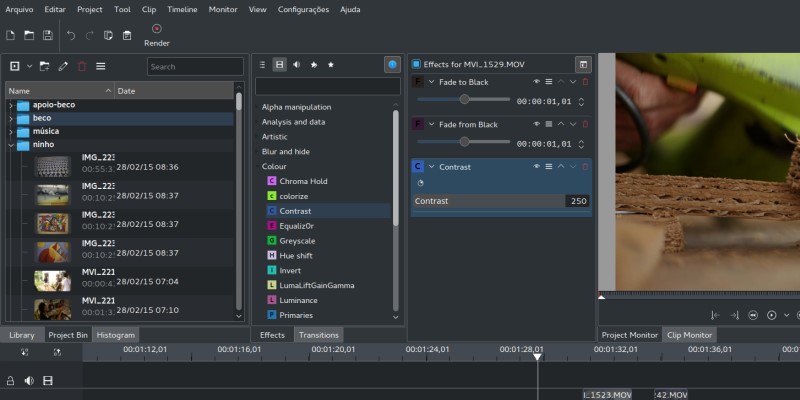 Davinci Resolve is the world’s advanced video editing software perfect as a Windows 10 Movie Maker Alternative. It is well known because it is the software that is used to color grade the American musical romantic comedy-drama La La Land. With its sleek and functional features, this editing software is divided into different numbers of panels such as Edit panel, Cut panel, Fusion, Fairlight, and more. Additionally, it supports frame-based metadata to the input video description and details on the video clips. Furthermore, this software has a new feature wherein multiple users can work on the same project simultaneously. 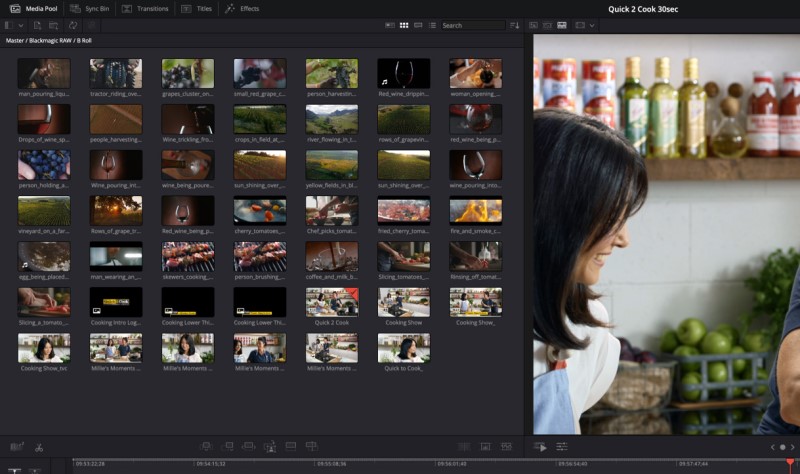 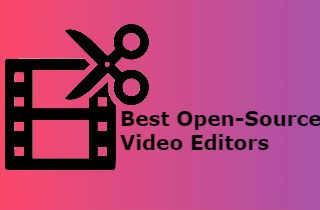 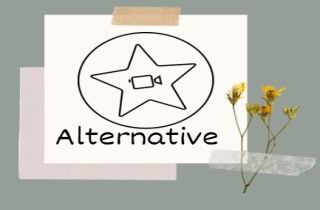