One of the best games that hooked millions of gamers because of its dynamic and unique gameplay is called the Minecraft. This game was developed by Mojang, Xbox Game Studios, Markus Persson. It made this game like a digital Lego, which means it is played by building houses, castles, and fortresses by combining lots of blocks. However, Minecraft doesn't have a storyline. Still, it allows you to experience grinding materials and use them to build and design your building. This game is an open world that lets you travel without any restriction, especially when you are searching for new and robust materials to use. Furthermore, you can play this game with your family and friends or even stranger online. Indeed, you will enjoy this game without fail. Also, we made a list of games like Minecraft. Keep on reading below to see all of them.

Minetest is one of the best Minecraft alternatives. It is an open-world game and a game engine. Moreover, multiple servers are also available. The InfiniMiner inspires the game. Minetest is the best alternate of Minecraft because of the similarity of its features. A near-infinite world, where a player can do whatever it wants to. Furthermore, almost every block can be used for building almost anything. However, Minetest has unique features that every gamer should experience, which are the different mods that players can use simultaneously. Besides, the textures available in the game are changeable. When it comes to adding custom features, Minetest provides the function of generating fascinating maps. Also, most people say that it is much easier to encounter random monsters on Minecraft than in Minetest, which is a good thing for most players. 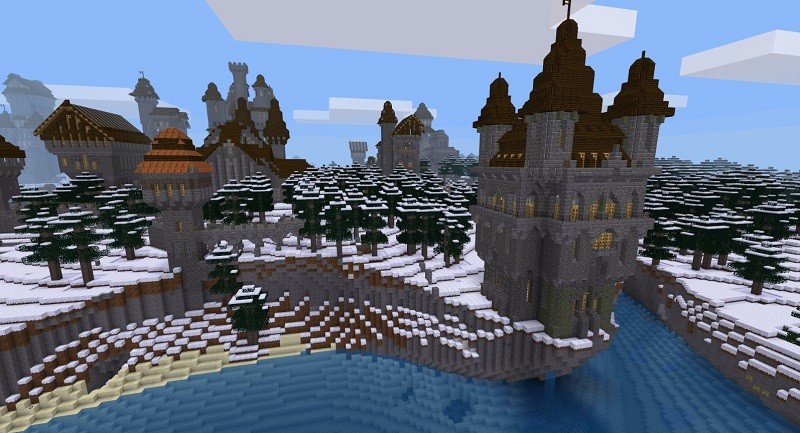 Many games similar to Minecraft are available on the internet. Survivalcraft is one of them. In Survivalcraft, a player is left alone on the shore of an infinite open world. Now, it has to survive using every means. In Survivalcraft, a player has to explore, mine, craft, build, hunt, and make traps. It is a game similar to Minecraft, but it also has some great features that persuade gamers towards it. Survivalcraft has many mining resources, along with multiple species of animals. It is easily mod able and provides detailed graphics to its user. The best part is that most players love the complex weather system in the game. The weather in the game is so realistic that it can be sunny now and rainy a few moments later. 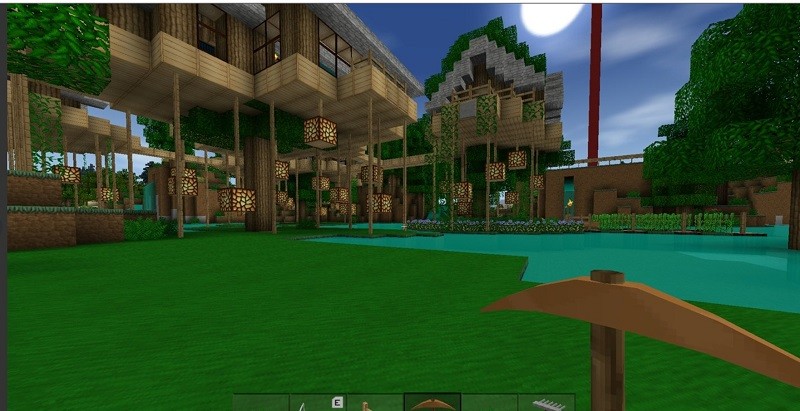 Lego Worlds is a sandbox game like Minecraft. The game revolves around the Lego theme. The blocks are switched with the LEGOo bricks. Now, you will explore a world of LEGO. Lego Worlds has tons of fantastic features that make it unique and attractive among both kids and adults. You can build any structures with the help of LEGO. It is also available to manipulate the environment according to your comfort. One of Lego's fascinating features is the racing cart, which puts you up against different non-playable characters. Enjoy it with your friends! Lego Worlds contains already built Lego Structures like high-rise buildings, cars, helicopters, and even spaceships. However, you can also find secret LEGO pieces to create something interesting and add them to your world. Beware of the mystical creatures that inhabit your world because they can cause threats for you! 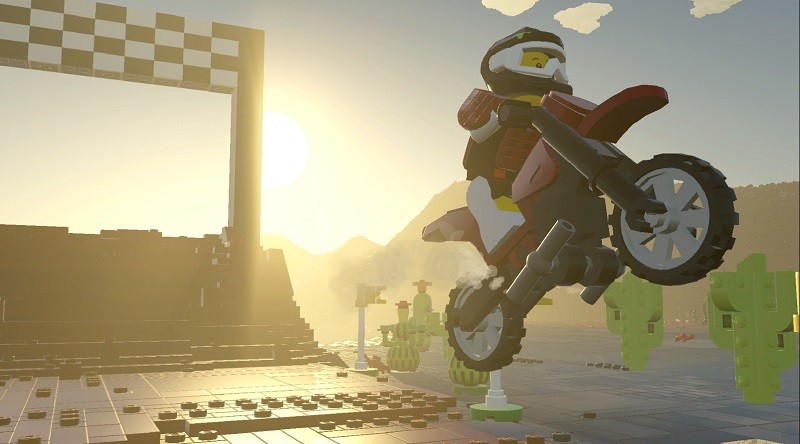 Terasology is a game mainly developed for a research purpose. To identify the most efficient rendering techniques in Java using LWJGL. Terasology also has the same pixelated graphics concept like Minecraft. It is one of the most similar games to Minecraft. Nevertheless, it has incredible unique features. The tech tree of Terasology is quite competitive, and real gamers like complexity within a game. If you do not like to explore too much, you can use the portals in the game to travel within seconds. The main feature that attracts players towards Terasology is its simulations of realistic elements. Terasology has NPC societies that can help you in the long run, which is a feature that is not available on other similar games. 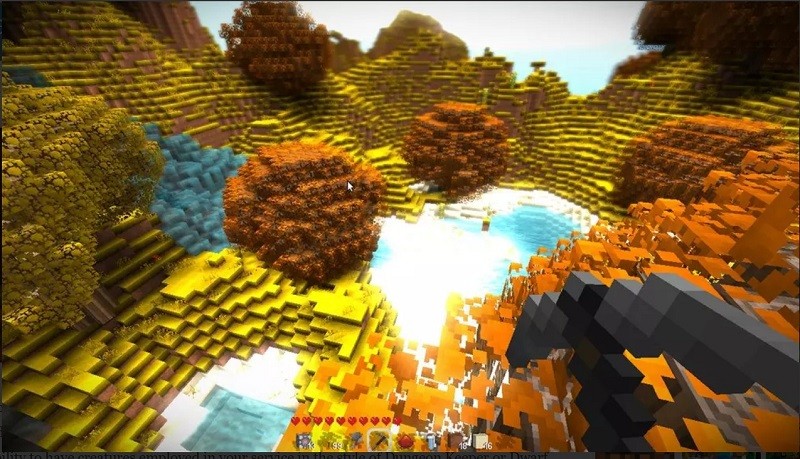 The Blockheads is a sandbox adventure game similar to Minecraft. It contains a vast number of worlds. The Blockheads have the same blocks design concept as Minecraft. Moreover, the genre is also the same. However, it has some additional features that make it unique. Use the multiplayer feature to play along with your friends. Voice chat communication is also available within the game. This feature allows players from different areas to interact as if they are beside each other. The Blockheads is a game like Minecraft, but it has many unique resources, including plants and fruits. 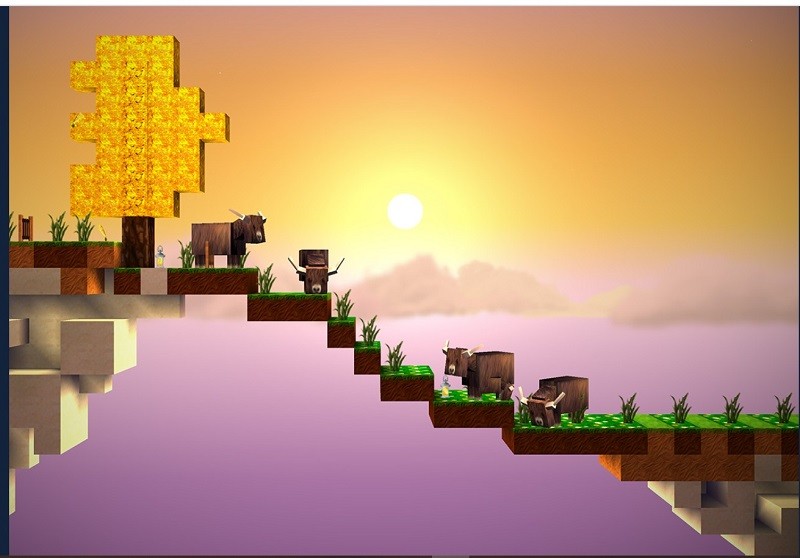 Creativerse is an adventure game and more like a future version of Minecraft. It is a world filled up with lots of mysteries. Your task is to reveal those secrets. The basic concept of the game is the same as the Minecraft. You have to explore and survive, but there is a lot more to see. Creativerse has every possible feature that can attract a gamer. While studying the environment, you will discover; Jungles, Ancient realms, Space ships, Pirate ships, Monsters, and many more. Creativerse is a Minecraft alternative, but it has more advanced features such as; your player can fly, using the future technology gliders. (Glider is not the only technology which you will experience). Enter the Creativerse along with your friends. 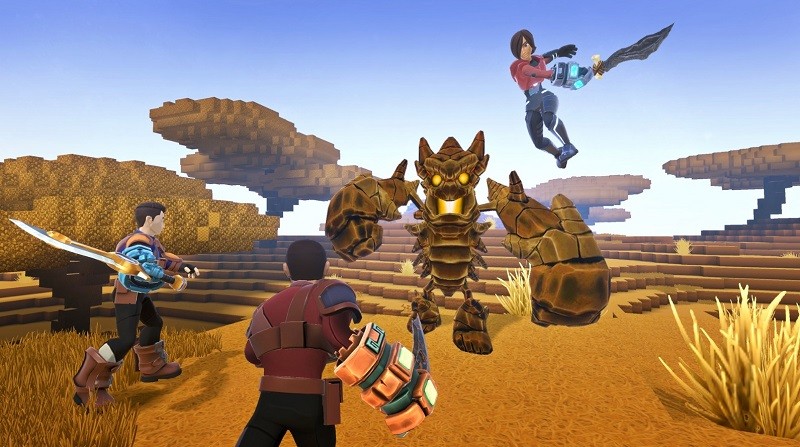 f you are looking for an alien version of Minecraft then No Man’s Sky is the best option. It is an open-universe game in which you have to explore, survive, fight, and trade. You will experience multiple species of aliens and many other cool things. No Man's Sky contains many advanced features that no gamer should skip. The universe of No Man's Sky contains 18 quintillion planets, and players are free to explore all of them. An infinite amount of advanced technology weapons are available to increase the fun. No Man's Sky is similar to Minecraft but with advanced features such as Spaceships, aircraft, and a separate ecosystem for every planet. Moreover, you can also discover new plants and give them a custom name. There are many other things that you can do in the game, attracting many players from around the world. 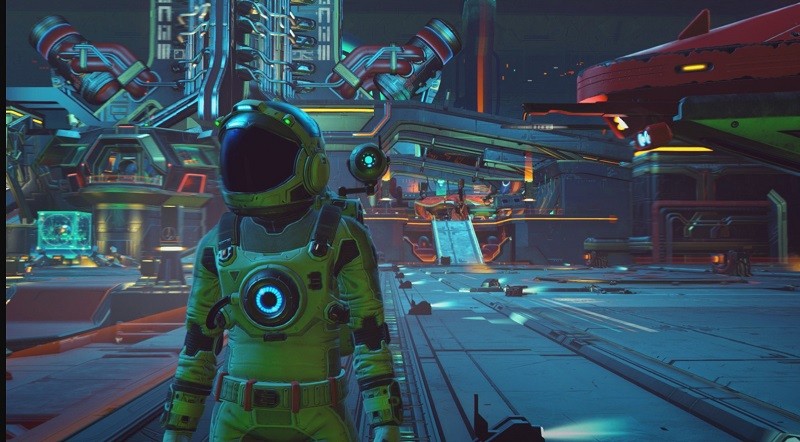 Mine Clone 2 is an unofficial Minecraft alternative. Every object available in this game is block-based (Same as Minecraft). The map of Mine Clone 2 is massive, and your task is to explore it. While exploring the environment, you have to focus on building, crafting, and hunting. Mine Clone 2 has multiple modes, such as survival and creative mode. Besides, Special items are available, which you will discover while exploring. It also has a vast inventory, which makes the game more interesting. Using the huge inventory space of your character, you will be able to gather and accommodate more materials. 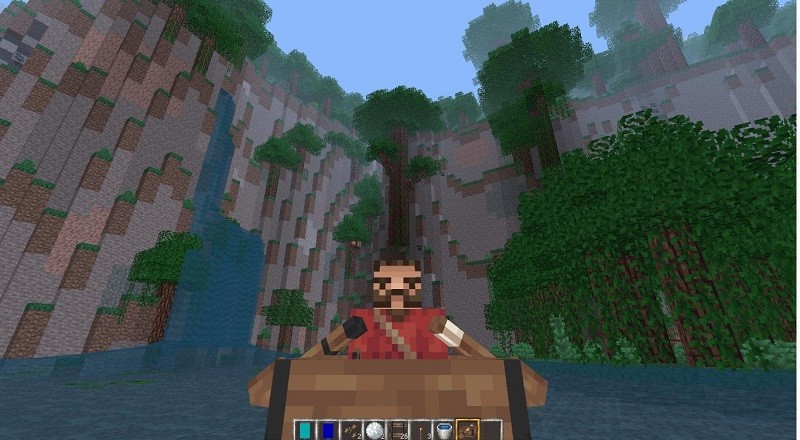 Another game that works like Minecraft is Space Engineers which is available to download on Steam. One good thing about this game is that the gameplay is like Minecraft, but the primary setting is in space. The game features two tutorial modes: "Easy Start Space" and "The First Jump." The first mode allows users to learn how to play the game and its mechanics. This mode is essential, so users will know how to use the tools to build their structures, which are vital for the next level. The First Jump is a campaign scenario so users could experience and learn the game's strategy.

The last Minecraft alternative on this list is Terraria. The developer also claims that it is one of the most famous survival and MMORPG games since it sold more than 12 million copies. Additionally, Terraria is available to almost any gaming consoles like Xbox, PS4, PC, and even mobile devices. Like Minecraft, users need to dig and gather materials to gain weapons to upgrade their character. Additionally, users would need to defeat a boss in every stage or "Worlds" to advance. One good thing about this game is that it provides so much versatility for its users. Regarding this, gamers are allowed to choose and wield multiple types of weapons and wear armors that they prefer. 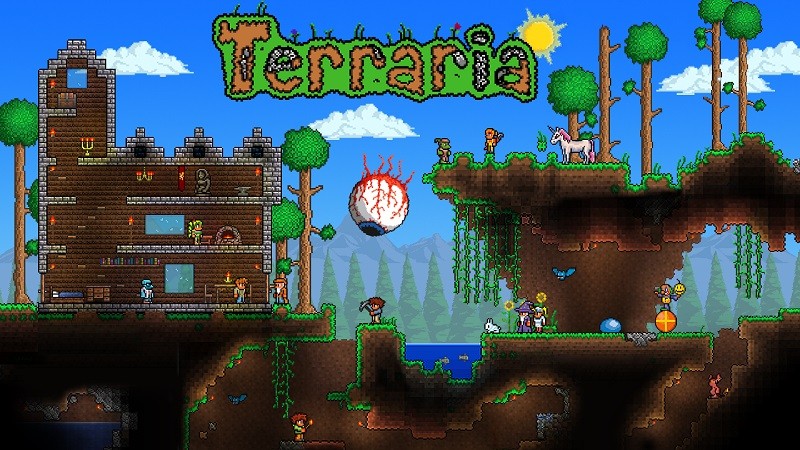 When playing one of the games, it is essential to remember the critical moments in the game. A convenient way to do so is by recording your game using a dependable screen recorder. This way, you will be able to relive every moment whenever you wish. With that being said, you can try AceThinker Screen Grabber Pro to record your gaming moments or to make a tutorial video about the game. This robust screen recorder can capture both video and audio, which makes it perfect for the job. Aside from that, Screen Grabber Pro can add annotations while recording. The tool is compatible with both Windows and Mac devices so that more people can enjoy its benefits. To learn how to use the tool, follow the steps below.

To get the tool, click one of the download buttons above. After that, launch the installer and then follow the setup wizard's instructions to install the tool properly. Choose to start the tool immediately by clicking the "Finish" button from the setup wizard. 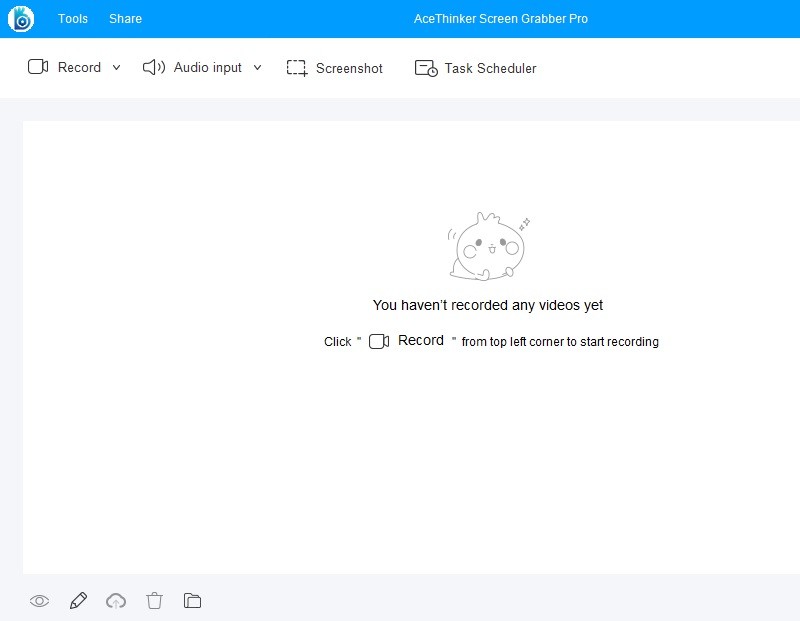 Step 3 End the recording and save the video

The games mentioned in the articles are the best Minecraft Alternatives. Every game has its uniqueness. However, the basic concept of all the game is similar to Minecraft. Some of the games are paid because they provide advanced features to their users. Try all of the Minecraft mentioned above alternatives and let us know in the comments section which one you like the most. Good Luck! 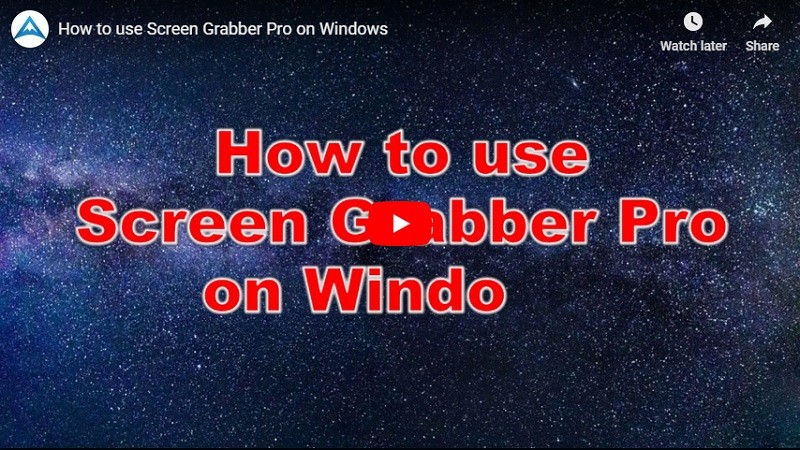 Guide on How to Record Steam Games Top 5 Operating System For Gaming in 2020