Gaming has risen to prominence, and some people have taken up playing video games as their occupation. Popular video platforms, such as Twitch, YouTube Gaming, and more, have provided people worldwide with the opportunity to broadcast their gameplays digitally and let the audience watch them. This, in effect, evolves into a full-fledged professional career. While many of the sites have a downloadable feature, most of them do not offer this option. Fear not, this article helps you pick the best game recorder for pc to screen record and save your favorite gameplays for later viewing pleasure.

It captures both audio and video; captures the sound simultaneously from your device, your microphone, or both. AceThinker Screen Grabber Premium provides multiple ways for users to catch their image, which is ideally suited to specific scenarios. You may be able to record the entire screen, a specific window or screen area, or just the screen area around your mouse cursor. There are various options for saving the video in many of the most-used formats, including AVI, WMV, FLV, MOV, MP4, MPEG, 3GP, GIF, and more. The app also has integration with YouTube, so you can quickly upload and share your videos. You can also add text, lines, arrows, circles, rectangles, and various other effects to enhance your video.

Though it is free software, there do exist powerful features that no other free software offers. This best gameplay recording software streams via various channels such as Facebook Live, YouTube Live, Hitbox, Twitch, and more. The user-friendly interface makes the process trouble-free. The easy-to-read feature helps users add sources, capture cards, and take photographs from windows. You can also configure the capture quality with OBS Studio, set the resolution according to your requirement, or use your monitor's resolution. You may also adjust the fps to your needs and the resolution downscale. It can be tailored to your needs as a recording system and produce a professional-level final product for sites like YouTube and Twitch. It also has a relatively minor effect on budget machine frame rates. 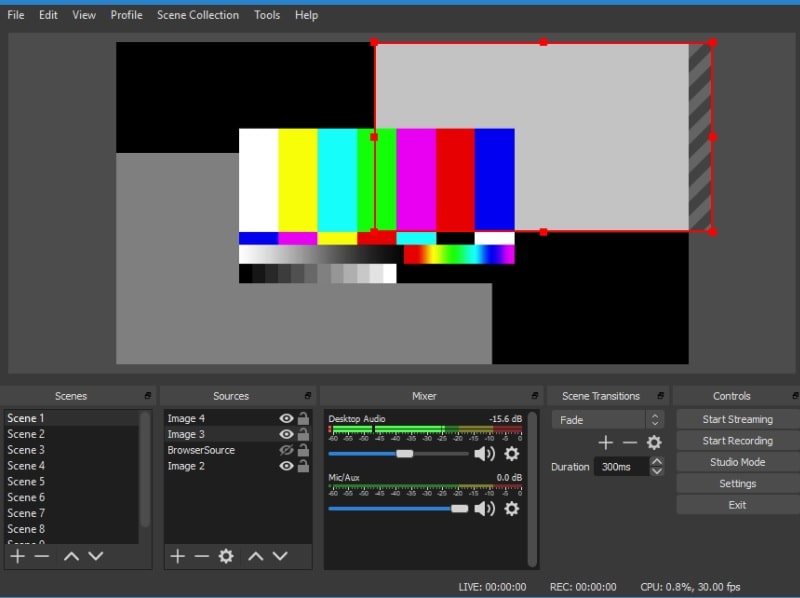 Bandicam, one of the best game screen recorders for PC, helps perform a high compression ratio video record while keeping the video quality closer to the original job. It also offers much superior output to other programs that provide similar functions. Since Bandicam is specifically designed to record high-speed gaming, the functionality of recording the game it provides is outstanding. The game recording mode, fitted with simple and advanced settings and options, allows users to record their installed games' game footage while running them. Users will customize their performance when recording a desktop screen using the exciting features inside it. This includes setting up arrows to point things, pictures, or objects on the screen, highlights to encircle them, and numbers to display steps, phases, or levels. This mode contains the pencil feature, which helps users to scribe and draw. Bandicam's screen recording features are compelling and useful, especially for video tutorial development. 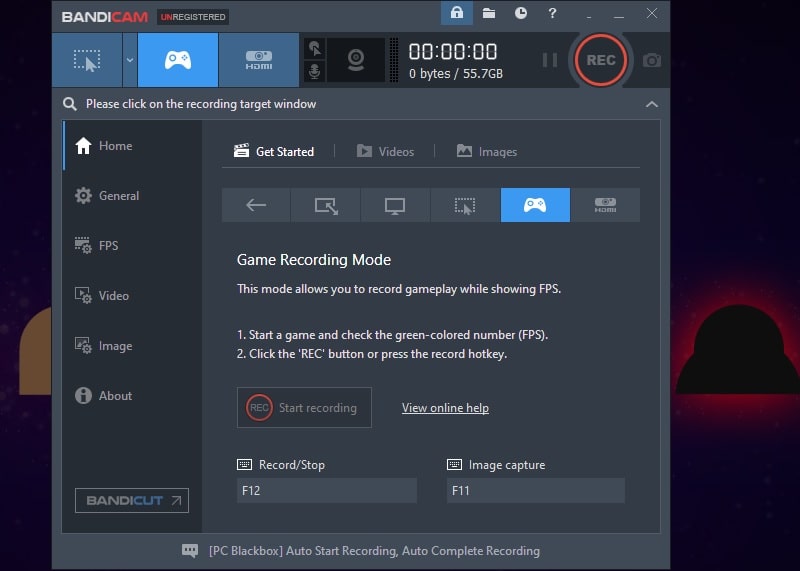 Action! is a screen recorder and video sharing device capable of capturing and uploading DirectX, OpenGL, and Vulcan games and applications. Thanks to its simple-to-use and intuitive interface, users can quickly and easily customize their settings. It is a feature-packed program capable of capturing a selected application, desktop area, or full-screen audio and 4 K webcam backup. It has very advanced gaming functions like Time-Shift, HUD that shows you FPS, free disk room, webcam preview, microphone volume, record length. Also, it has a unique ability to view overlay chat over all my streamed games. Users will customize their performance when recording a desktop screen using the exciting features inside it. It includes setting up arrows to point things, pictures, or objects on the screen, highlights to encircle them, and numbers to display steps phases or levels. 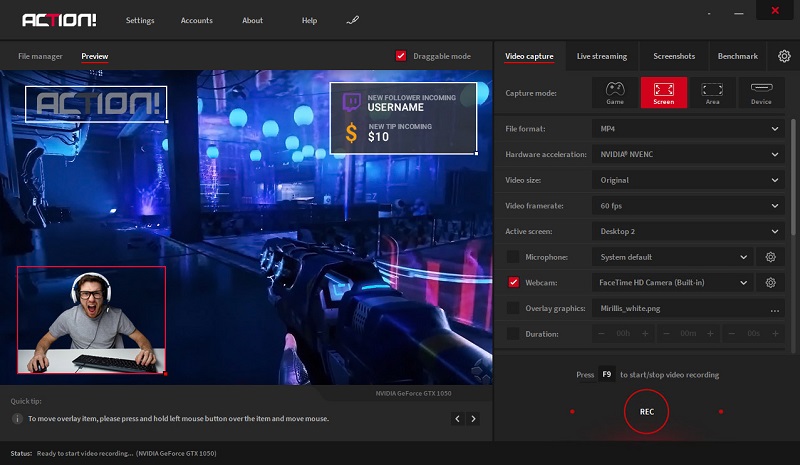 XSplit Gamecaster is well-known as one of the most straightforward but interactive pc game recording software providing the best live recording capabilities as well as live streaming needs. There's no hesitation in admitting that the Gamecaster is genuinely designed to support all kinds of streamers and video recorders. It fits whether they're pros, casual gamers, or severe game lovers. Every gamer can access this platform to generate live streams of their game footage. They give every control over an interactive user interface instead of causing complications like other high-end resources in setup. On the other hand, XSplit broadcaster is well-known for being an innovative audio-video mixing device. It can produce professional-quality content for both live broadcasting and video recording needs. Its interactive and straightforward interface enables gamers to create content that catches the eye within minutes. 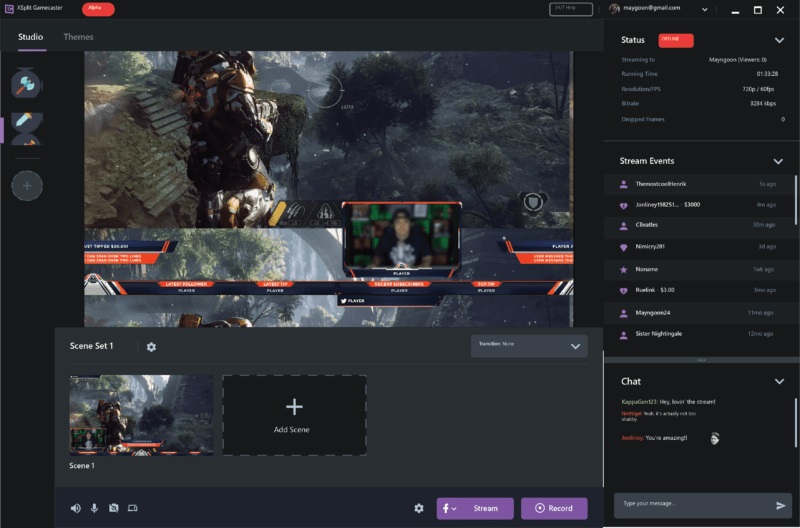 NVidia's ShadowPlay aims to overcome its significant rivals not only by providing a more robust range of features but also by taking advantage of the significantly more efficient GPU encoding than conventional game recording methods. ShadowPlay supports local recording via GPU encoding, supports all Direct X 9, 10, and 11 GPUs, and soon brings Twitch Streaming support. Best of all, it's "free," of course, you have to buy a GTX 650 or better desktop graphics card, but it doesn't cost you anything once you've got it. The good thing about ShadowPlay is that someone with an NVidia card would have the game already running on their computer. If you plan to use an alternative to ShadowPlay on a budget rig, we would suggest removing the program to prevent GFE from running in the background and further dragging down the results. 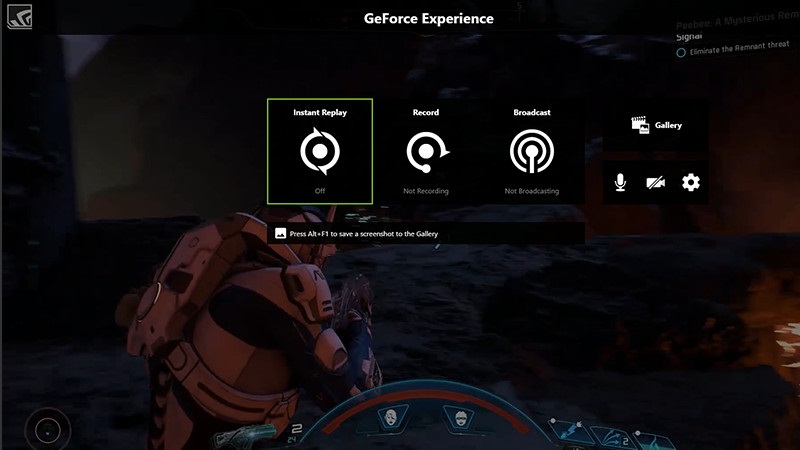 Windows has a native screen recorder for pc games called the Game Bar, which often performs very well and is relatively simple to use. Well, the other applications may have more capabilities or features. However, one thing they lack is that they are third-party applications built separately in the operating system. Simultaneously, the Game DVR is the part of the core structure of Windows that works with it and performs accordingly. The output of the Game Bar is excellent, the interface is straightforward, and it has the necessary features you need. But those moments when you can't see the Windows 10 Game Bar mean you never really know if you record until the gaming session is over. 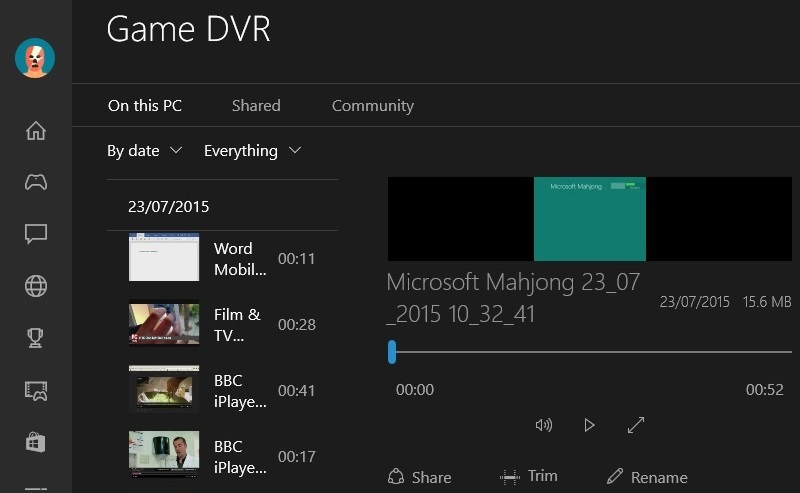 ScreenFlow started its life as a Mac, highly competent screen capture tool. And although this remains its primary focus, it has developed into a powerful video editing tool. So let's look at it and see if it squares up to the healthy rivalry. You can easily import clips and photos into ScreenFlow by using its Import feature. It allows you to search through the drives connected to your Mac and pick the files you need. More simply, by dragging a file straight from the Finder into the Timeline or Media Library of ScreenFlow. However, you cannot snatch media from a camera: first, you need to find some way to get clips from the computer before adding them to your project. 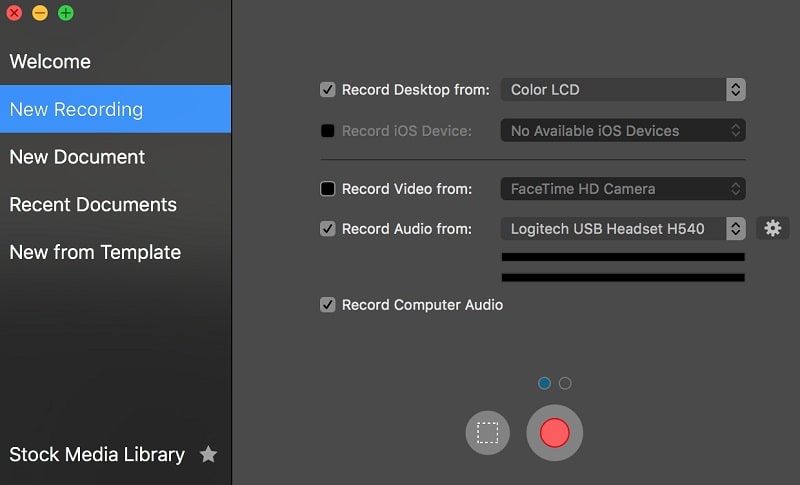 Looking for software that offers magnificent efficiency and authentic audio recording and the video screen is used globally by beginning users and experts. Screenflick provides just what any recorders want to make their piece of art with an extensive range of screen recording options. 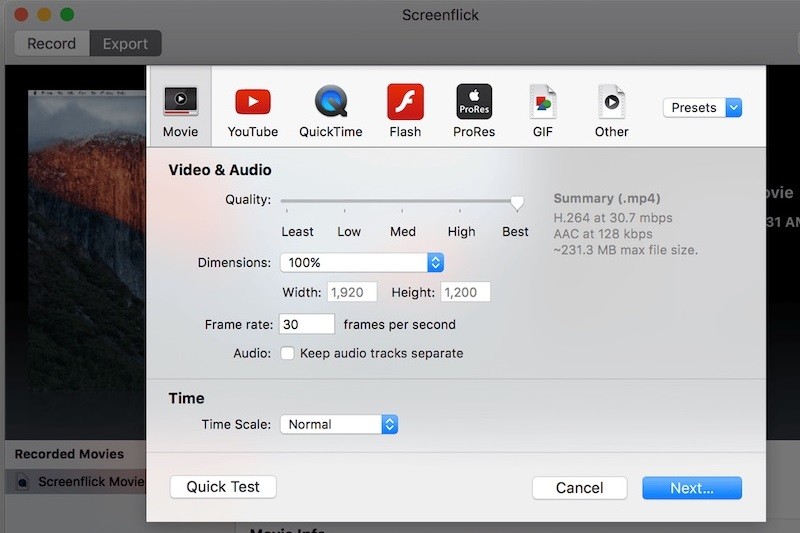 QuickTime is a type of software that is used on your Mac machine to record and edit Skype videos. It is one of Mac OSx's best Skype video recorders, which can't restrict the end-user on anything. With QuickTime, you can film, edit, and create videos over Skype with a great deal of ease. You can make slide shows for Skype's audios and videos too. If you have images you'd like to convert to different formats, this is the program you want to use. Be able to use QuickTime to save videos from the internet. Using this tool, it can also access, edit, crop, and resize images. It is especially useful for use if you want to watch your favorite videos in various formats. 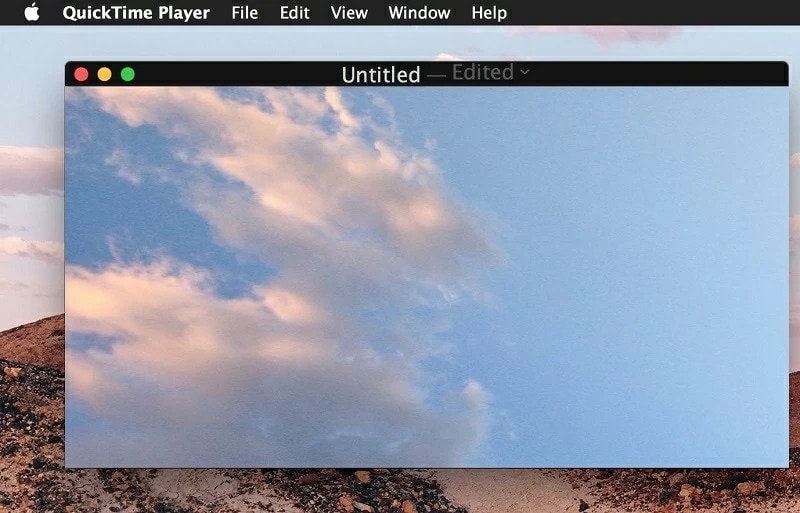 How to Record 3DS Gameplay